Cities, Bicycles, and the Future of Bells

Bike gatherings are always of interest, at least to bike-minded people. In the middle of June there was something of a “gathering of tribes” in the Twin Cities, Minnesota area. The Nature Valley Grand Prix was in town. Cyclists clad in bright Lycra from all over the USA and the world are competing here in a grueling five-day race. The bikes are sleek, the athletes fit, and everyone shares a common goal... to WIN!! 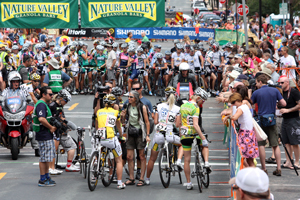 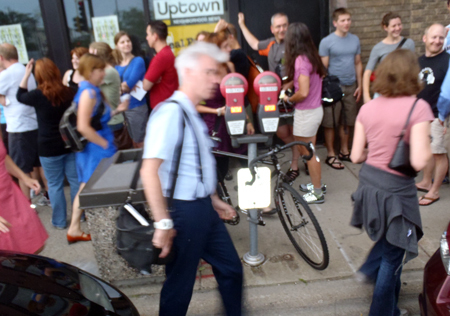 A musician marching to his own tempo, David Byrne

Concurrently, there was a different sort of gathering, though it seemed as if they were unaware of the each other’s existence. Minnesota Nice Ride presented a panel discussion titled “Cities, Bicycles and the Future of Getting Around.” The panel included four panelists presenting ideas on transportation and how the bicycle can influence and mold modern life. Urban theorist and bicycle advocate, David Byrne, kicked off the evening. 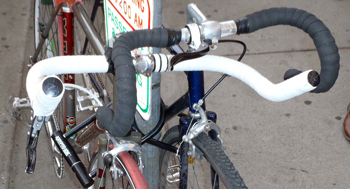 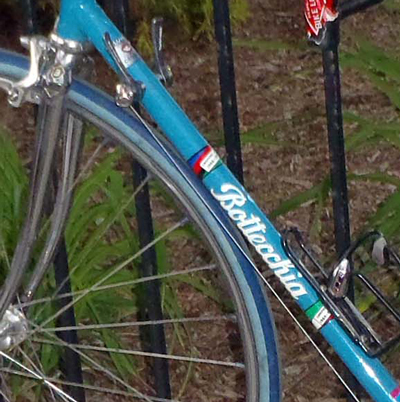 A very clean Bottecchia, with appropriate downtube shifters and coordinating tires. Blue, always a good choice in color, isn't it?

This was a gathering of the tribe indeed. A crowd of nearly 1,000 wrapped around the block waiting to get into the theater. There were fascinating ideas, interesting concepts, and insightful observations, all well articulated, and I am sure someone will write about that. However, of interest to this author, there were bikes parked everywhere. A review of these data points will tell us something of the crowd to be found inside at the Uptown Theater:

Bike Types: 60% multi-speeds, 40% single speed (freewheel, fixed and a single BMX). Conclusion: well, the Uptown Theater is in Minneapolis, so this mix is not surprising. As an observation, a majority of single speeds found here were converted bikes, not bikes designed or purchased as a uni-coggers.

Handlebar Types: 51% drop bars, 29% flat bars (straight, MTB type), 10% upright bars (comfort type, bending back to the rider), 8% bullhorns, and (disappointingly) 2% mustache. Conclusion: The full potential of the mustache bar has yet be appreciated by the masses.

Brands: 20% unknown brands (painted over, missing any label or headbadge), 9% for both Trek and Schwinn, 8% Bianchi (of which most were converted single speeds), 5% Raleigh (including the black upright that was at least 40 years old). The remaining 49% were various brands, including some of interest such as Bottecchia, Gitane, Sears, Huffy, Bridgestone, and, my favorite of the evening, a Pogliaghi. Conclusion: There is some history in these bikes and in their owners.

These are all the bikes that the author could photograph, but where’s Calvin’s bike? The first two readers to identify Calvin’s bike and email us will win a BBB-2 Big Blue Book of Bike Repair. NOTE: We have our two winners! Blair O’Malley (San Jose, CA, USA) and Tim Sittler (Burnaby, BC, Canada) will receive a book each using their finely tuned senses in locating such an excellent machine.

Perhaps as a surprise to no one familiar with the advocacy demographic, there was a lack carbon fiber frames in the mix, coming in a 0.00%. It is possilbe there may have been a few attendees who are not true belivers, and had a full carbon Merckx or Argon 18, stored away in their basement, where it paces like a caged wild cat, dreaming of release. However, as more and more carbon bikes trickle down, this may change, as you see at some train station parking lots in Europe.

It did strike the author that handlebar streamers were as lacking as carbon frames. Nonetheless, a wide variety of accessories, including fenders, milk crates, cards in wheels, computer mounts, baskets, and bells enhanced the fleet. It will be the lattermost of these, the bell, the accessory that sounds for all to hear, that will now dominate the tone of this tome.

Like any tool, a bell can have multiple uses. Its common use is to warn other cyclists and pedestrians of the approaching and overtaking cyclist. A much under used function of this wonder addition is to facilitate or supplement a friendly greeting. When passing a cyclist going the opposite direction, with both at “bike path” speed of approximately 18 feet per second (5.5 mps), the effective relative speed to one another is twice that rate, at 36 feet per second (11 mps). To articulate a verbal “hello” the cyclist’s timing must be exact. Too early and no one will hear you, too late are you are talking to the wind. Remember, the human voice projects primarily forward. An alternative solution is to ding your bell and add a smile or wave. The ringing of cycling liberty and friendliness will linger as you speed past. 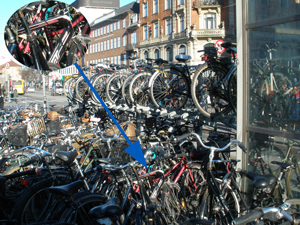 This carbon commuter is just another bike out of many in a Danish bike lot, marked by the blue arrow (photo credit Ken Whelpdale) 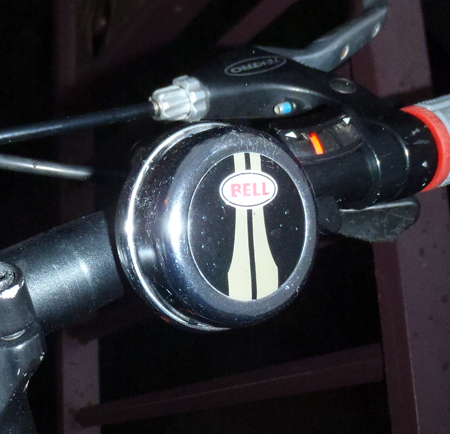 In this case, “Bell” is the brand, not a descriptor 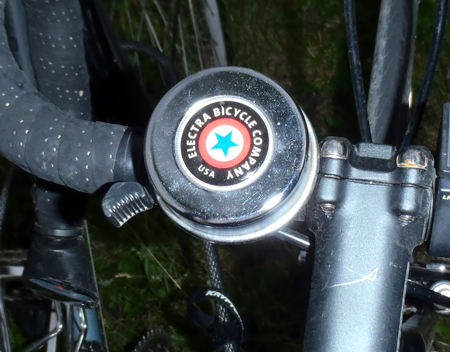 “Electra” is actually a manual bicycle, and so is the bell

Selecting one’s personal rolling ring tone is done to make a statement and there are primarily four factors of concern when a mechanic recommends a bell: the material, the size, the type of dinger, and, of course, the dingee. For material, we see primarily steel and aluminum, and the tone varies, aluminum being a softer tone. Steel tends to be a brighter sound. Those familiar with bells will of course sing the praises of brass, but this lovely soft metal is not so common on modern bicycle bells, mostly due to cost. Brass is wonderful to shape and machine, and because of this is found on the small fine thread of most bicycle spoke nipples and in some pivots as a bushing. 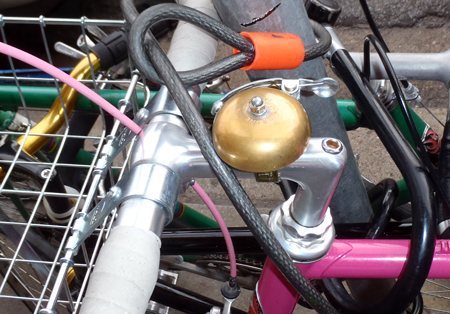 A very clean and pure sounding anodized aluminum bell. The striker is also metal, not plastic. However, its mount here makes it difficult to reach. 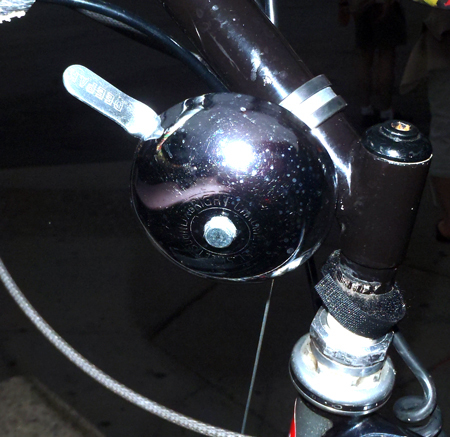 A large “double dinger,” striking twice for each push on the lever. Not easy to reach, but where does one put such a large dinger?

The bell size is very important to the resulting rolling ring tone. Smaller is higher, and large is lower, as well as louder. Recall here the xylophone, the smaller pieces resonate with a higher pitch, the larger pieces will be a lower pitch. Related to the sound is also the bell mounting design. If the bell is relatively closed on the end by the mount, it will have more of a drum sound because the mount will deaden some of the music. If the mounting system permits the concave side of the bell dome to be open, it permits more resonation to escape, free to find our ears. Tied to the bell size is also the bell thickness, as any practitioner of Zildjian® cymbals will explain to you. Thinner material is lively, but also more susceptible to dents and damage. 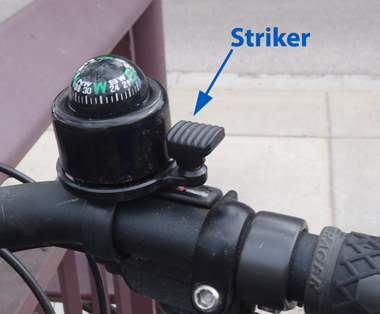 A single-dinger bell, right mounted, sporting an early GPS system, so you now know you are now headed west, more or less 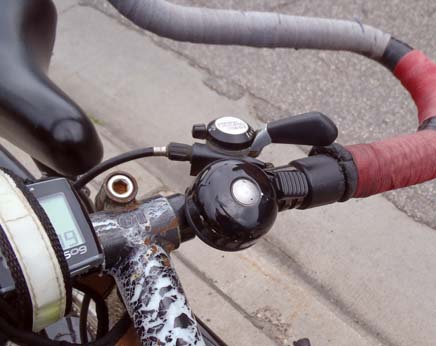 A thumb mount rear shifter next to the bell, a well considered and positioned system

The striker, the mechanism that hits the bell to create the ring, deserves consideration as well. This may be plastic, which softens the tone, or metal, which will make a sharper, brighter timbre. Additionally, the striker design may be a “single-dinger” or, as known to the author, a “ring-a-dinger.” The single dinger is one where the musician, or rather for us, the cyclist, strikes the bell with one single tap or strike. The ring-a-dinger produces a repeated or drumming effect on the bell, for the classic “burr-burr-burr,” rather like the analog telephones of yesteryear or the common ice cream cart. A skilled rider may affect some creativity on either system, but the single-dinger is often the preferred option for the cyclist with the skill set of both rhythm and dexterity. 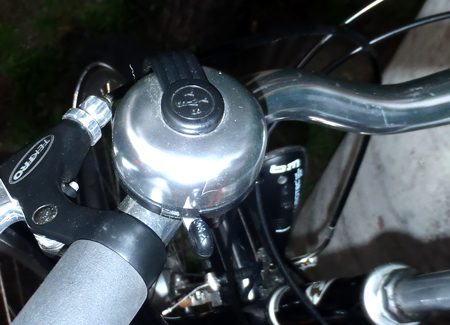 Left mounted, ring-a-ding style. Note, however, how the ride must reach over the bell to play it. Reposition for better biomechanics. 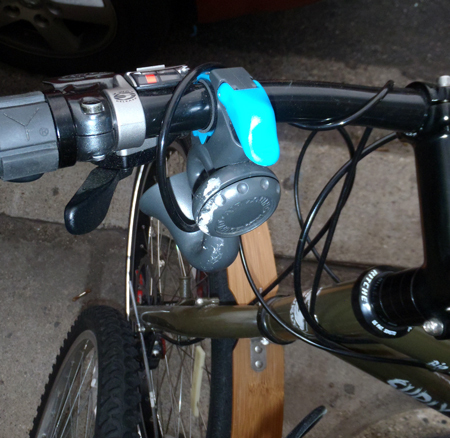 Not a bell, but an air horn powered by a pressurized air cartridge. This is when you really want to get someone attention, or if you are at the World Cup.

It is said a tool is no better than the mechanic using it, or in this case, the rider. How the cyclist reaches the bell is important. It is common to see bells mounted on top of the bars and operated by the thumb. This is not always very efficient or comfortable. Consider different mounting positions, both right-mounted or left-mounted, before securing the bell. Recall now the people you see sitting at a table, perhaps bored. They drum their fingers. Are they using only the four digits to do this? The ding-a-ling technician should then mount so the bell so it is reached by the pointer finger. But this is not always the case, for consider now the music of the thumb piano. If your skill as a cycling griot is in the thumbs, then mount accordingly. 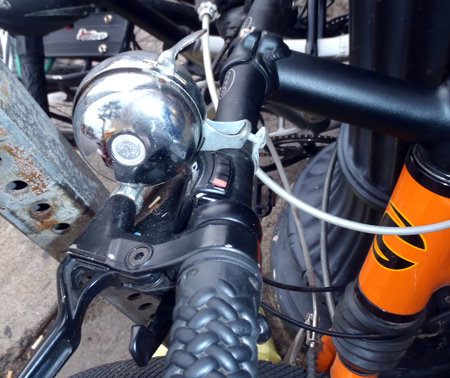 A very interesting bell design. The outer shell is stationary, and the inner bell rotates for the ring-a-ding sound. However, the rider must take his/her hand completely off the left grip to operate it. 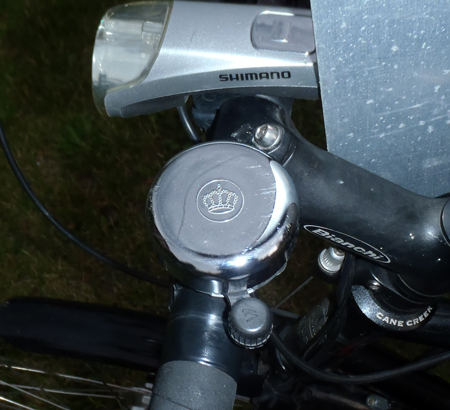 The English crown, always a good sign, at least on bike parts. 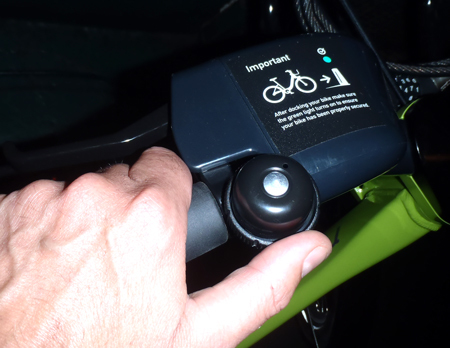 A rotating bell design used on the Nice Ride machines

BELL MAINTENANCE:
Like any other piece of equipment, the cycling bell needs care and attention. As addressed above, consider first were to mount the unit. It should be fully secure on the bar. A loose accessory may twist and fail, especially when needed most, or it may even fall off and become a hazard in the process.

Some models will use rotating or pivoting parts. Use lubrication only if these seems sticky or if they rust. The dinger should not rest against the bell dome, or it will deaden the sound, resulting in an embarrasing Thump-Thump-Thump, rather then the desired ding-ding-ding. Bend the striker away using needle nose pliers. The bell dome may be threaded onto the mount. If the dome loosens, re-mount using a thread-locker.

AUTHOR’S NOTE:
All the sounds here are from the actual bells seen in the images. A belated thank you to all the bell owners.