This article will discuss the various headset types and standards found on modern bikes. The headset of a bicycle allows the fork steering column and front wheel to rotate and turn. There are now several different systems in use on bicycles. The installation and service aspect vary according to the style.

This article will review the following headset types:

There are also a few bicycle manufacturers using a uniquely proprietary headsets of unique design.

A new system of terminology is being introduced call SHIS (Standard Headset Information System). The SHIS is a way to bring organization to the discussion of different standards. For a detailed discussion see SHIS. 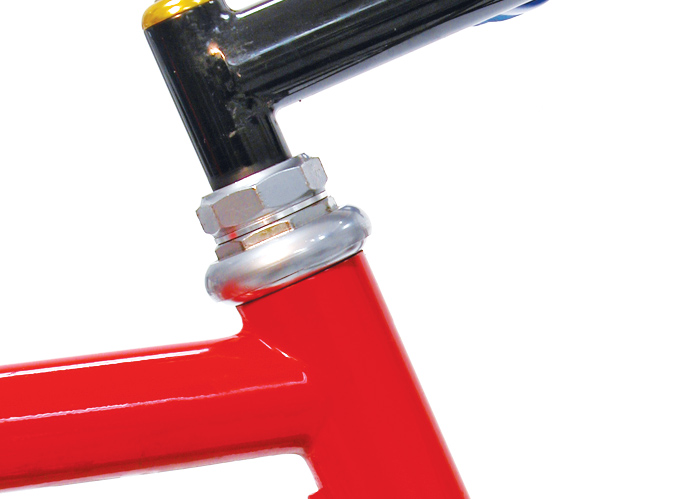 The threaded headset was once the common headset design for most bicycles. The “threaded” in the name refers to the external threading at the top of the fork steering column. Bearing cups are pressed into the bike head tube. The bearings, which may be loose ball bearings, retainer ball bearings, or cartridge bearings, sit above and below the pressed races. The top most bearing-race has internal threading, and is held in place by a threaded locknut. The stem has no effect on the headset adjustment. 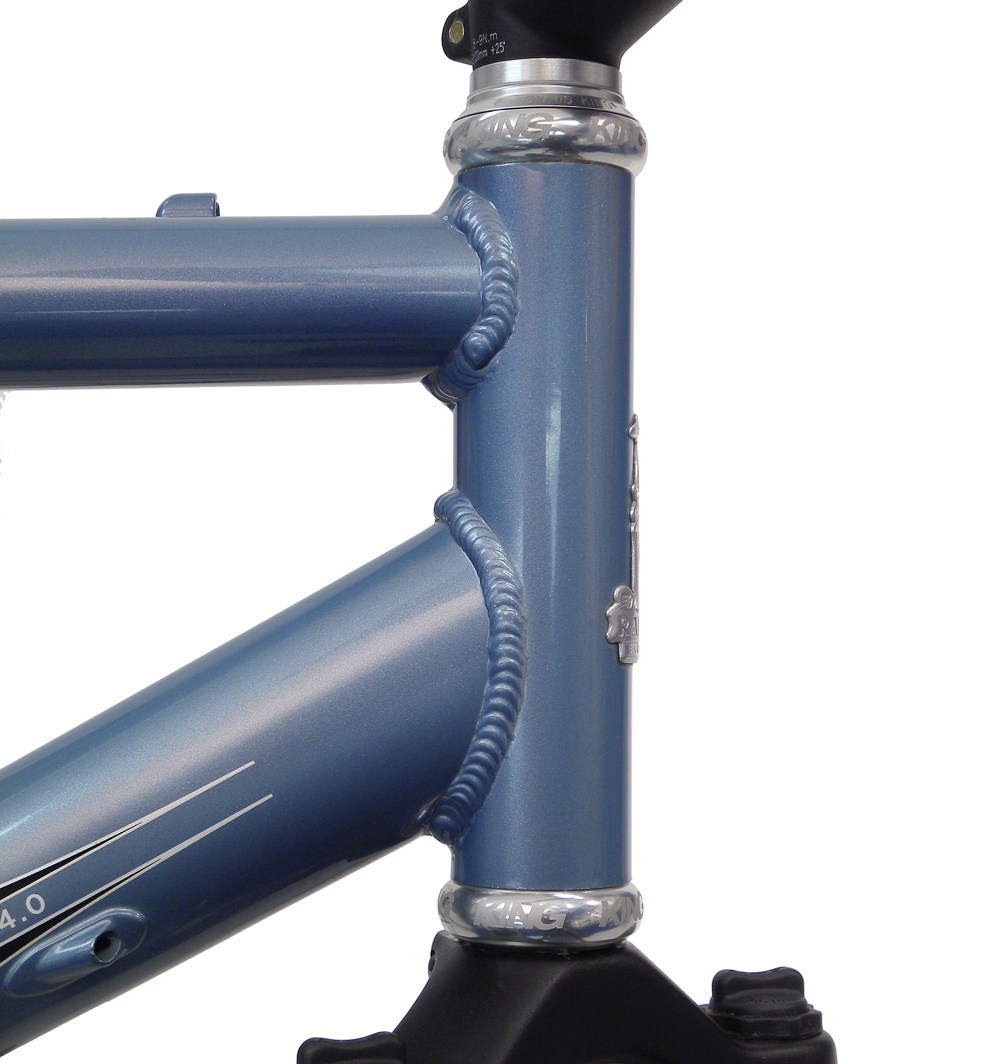 Threadless headsets have many of the same features as Threaded Headsets. Bearing cups are pressed into the bike headtube. The bearings, which may be loose ball bearings, retainer ball bearings, or cartridge bearings, sit above and below the pressed races. The steering column has no threading. The top race uses an internal centering sleeve on the column to maintain alignment to the bearing cup. Pressure is applied to the top race from the stem. Threadless Headsets must use a compatible stem that matches the steering column diameter. The stem binds to the outside of the column, and holds the top race in adjustment. The threadless standards are 1-inch and 1-1/8 inch diameter steering column. For more on conventional threadless headset including the various standards see Threadless Headset Service. 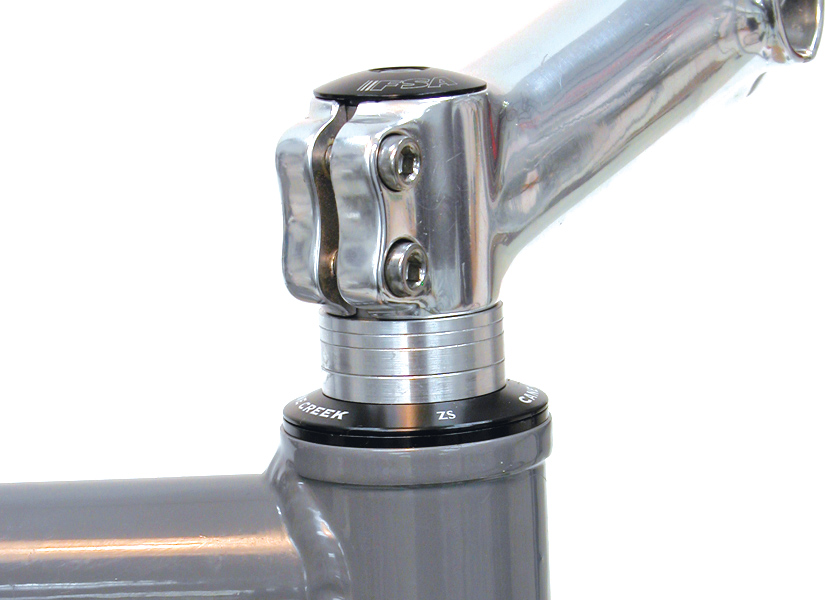 This type of headset system has, unfortunately, several names. Cane Creek® uses ZS or Zero Stack, while FSA® uses the Orbit Z series. The low-profile, zero-stack, integrated-with-cups, semi-Integrated, or internal-headset systems use pressed frame cups that act as a holder for the bearings. The cups have a flange, or lip, and sit adjacent to the outer edge of the top and bottom of the headtube. The headtube is a relatively large outside diameter, approximately 50mm, and cups allow the bearings to sit flush or even inside the headtube. The headset bearings sit “internally” to the top and bottom of the headtube. Some models use a cup that holds a cartridge bearing. The cartridge bearing is a slip fit into the cups. The cups act as a bearing holder and do not take bearing movement or wear directly. Other types have the cartridge bearing and cup/holder as a unit. These are simply replaced as a unit when it is worn out. Still another version of this type uses a cup and cone system with caged ball bearings, similar to the conventional threadless headsets. Additionally, the depth of insertion into the headtube will vary between brands and type. If the bike was designed for a shallow cup, a deeper cup will not properly fit. This lack of consensus in depth makes reaming the inside of the headtube problematic.

The Low Profile type of headset is adjusted in a similar fashion as threadless headsets. Pressure is applied from an adjusting cap and bolt in the stem. The Low Profile headsets, even the “zero stack”, do have some stack height, in spite of their name. The steering column is commonly 1-1/8 inch diameter.

Park Tool offers the 690-XL facer for some of the Low Profile headtubes. This facer is used with the 768 Pilot to machine the top and bottom surfaces of the headtube. 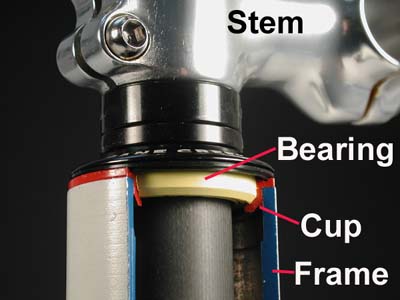 Below is an image of a Low Profile headset using a cup and bearing as one unit. These systems align bearings to the top and bottom on the headtube faces, there is no angular contact inside the headtube. Note image below with cup pressing into frame. Lip of bearing cup presses against headtube face. 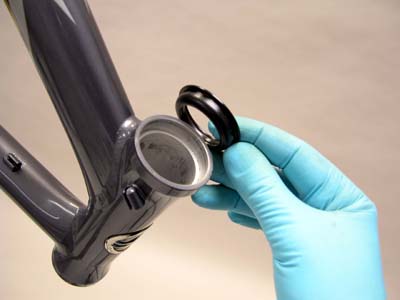 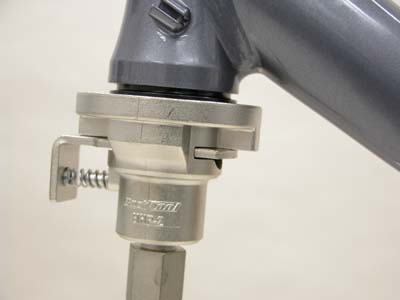 Below is an image of the system using bearing cups, cone, and caged ball bearings, similar to conventional threadless headsets. Generally, these are considered less expensive headsets. 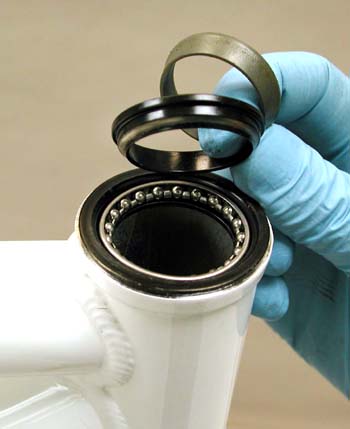 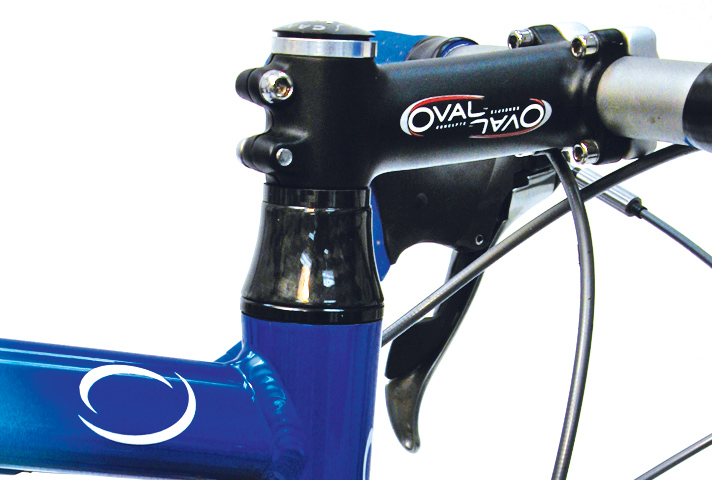 The integrated system uses cartridge bearings that are supported by machining in a specially shaped head tube. The frame may also use pressed rings or retainers inside the headtube. A cartridge bearing slips into these “cups” or supports, and is simply lifted out for replacement. There is no contact with the headtube face. The bearing sits inside the headtube, and references the angular contact. There are different standards within this integrated-angular contact family, and these are not interchangeable. A table at the end of this article summarizes the various standards.

The less common 36-degree angular contact standard uses a bearing for the 1-1/8 inch steering columns with a 41.5mm outside diameter. The bearings may be marked “36-36.” The IS frame standard of 36-degrees is now considered obsolete.

Bearing adjustment in these systems similar to the threadless headset. Pressure is applied from an adjusting cap and bolt in the stem. 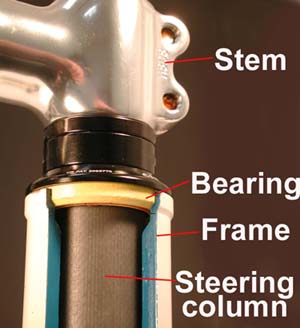 The image below shows the inside of the specially designed and machined headtube. The inside bevel acts as the bearing “cup.” Cartridge bearing are used which drop directly into the headtube as a slip fit. There is no pressing involved. All integrated system headset bearings use the internal bearing support inside the frame, not the top face of the headtube, for proper alignment reference. 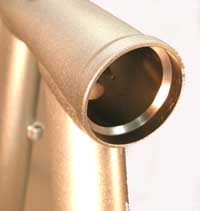 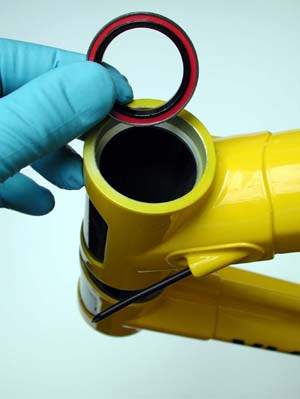 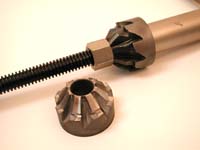 Use the Park Tool 756S cutters for the 45-degree angular contact IS frames. See also headtube machining at IS reaming/facing service.

The frame below uses pressed inserts or rings for the angular contact. Notice the split in the ring. These press in with only hand pressure against the machined relief in the frame. 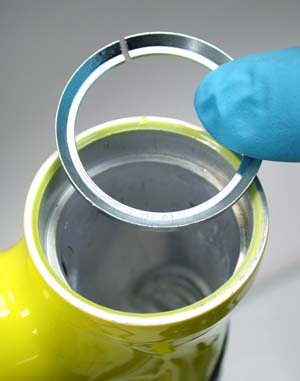 The Campagnolo® Hiddenset is a proprietary design, and is basically an integrated-angular contact type without cups. The frame must be compatible with this design for this headset to be used. The bearings cone races do not press into the frame. The frame has a specially machined headtube to accept the bearings. However, this standard is not interchangeable with the Integrated System described above. Adjustment is similar to a conventional threadless headset.

Steering columns may be either 1-inch or 1-1/8 inch in this standard. The bearings are a slip fit into the frame. The common 1-1/8 inch standard has a bearing outside diameter of nominally 41.8mm with a 45-degree bearing seat. Campagnolo® brand bearings use a caged ball bearing inside the bearing unit. The unit can be pulled apart to be cleaned and regreased. Some other brands use a non-serviceable bearing, which are simply replaced, not serviced. 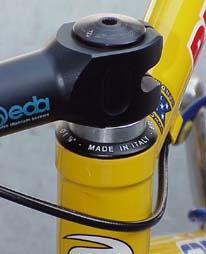 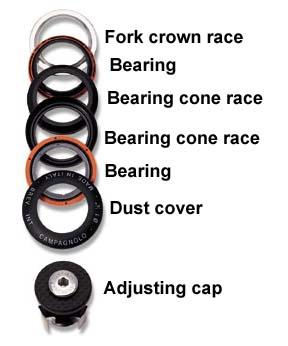 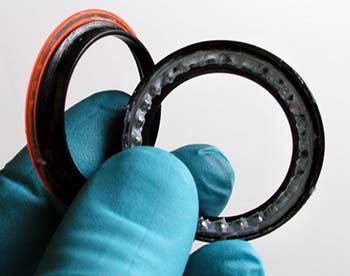 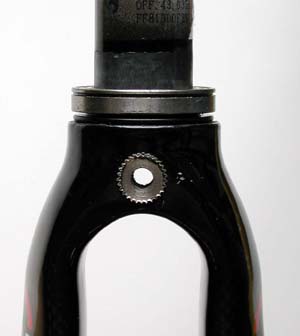 The Microtech® headset system is a proprietary integrated system. The frame headtube is machined specifically for the bearing. There is no angular contact in the frame for the bearing, but rather a square edge is recessed below the top and bottom face. The bearings are a press fit inside the frame and sit on the machined edge. Bearing alignment then references the internal machining, not the top and bottom faces. The lower bearing is also a press fit onto the steering column. The 1-1/8-inch forks use a bearing with an outside diameter of 42mm. Bearing adjustment is the same as threadless systems. 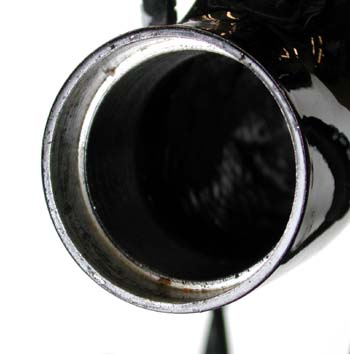 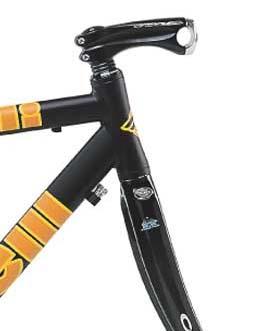 The Columbus type headset uses a cartridge bearing holding-cup that is pressed into the frame. The frame has no special seat machined inside the headtube. The frame head tube has an outside diameter of 45mm and a machined inside diameter of approximately 39.9mm. A cup of 45mm outside diameter is pressed into the frame. The cartridge bearings sit above and below the frame in these cups. The bearings are nominally 41.5mm outside diameter and are a slip-fit into the cups. The bearing seat of the cups is 36 degrees. This headset allows the “image” of an integrated system by matching the headtube diameter with the cup outside diameter. The Columbus®-type headsets are not interchangeable with other types. Cups are typically painted with the frame, which assists to hide their appearance on the bike. Adjustment is similar to threadless headsets.

Columbus® offers this system to frame builders with steel headtube inserts. These inserts are welded into the frame and are then effectively similar to the integrated system described above. The insert system is also in the 36-degree angular frame contact. 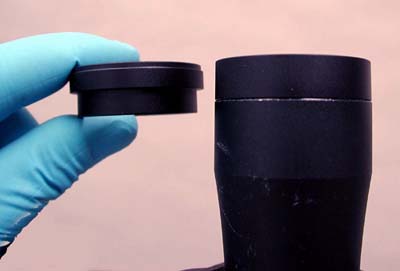 The Onepointfive Standard® uses a 1.5-inch diameter (38.1mm) steering column. The headtube inside diameter is approximately 49.6mm. The headsets are conventional threadless types, and but are simply quite large. The adjustment procedure is the same as threadless headsets. Below is a frame cup from the Onepointfive standard next to a 1-1/8-inch standard frame cup. 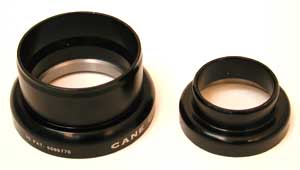 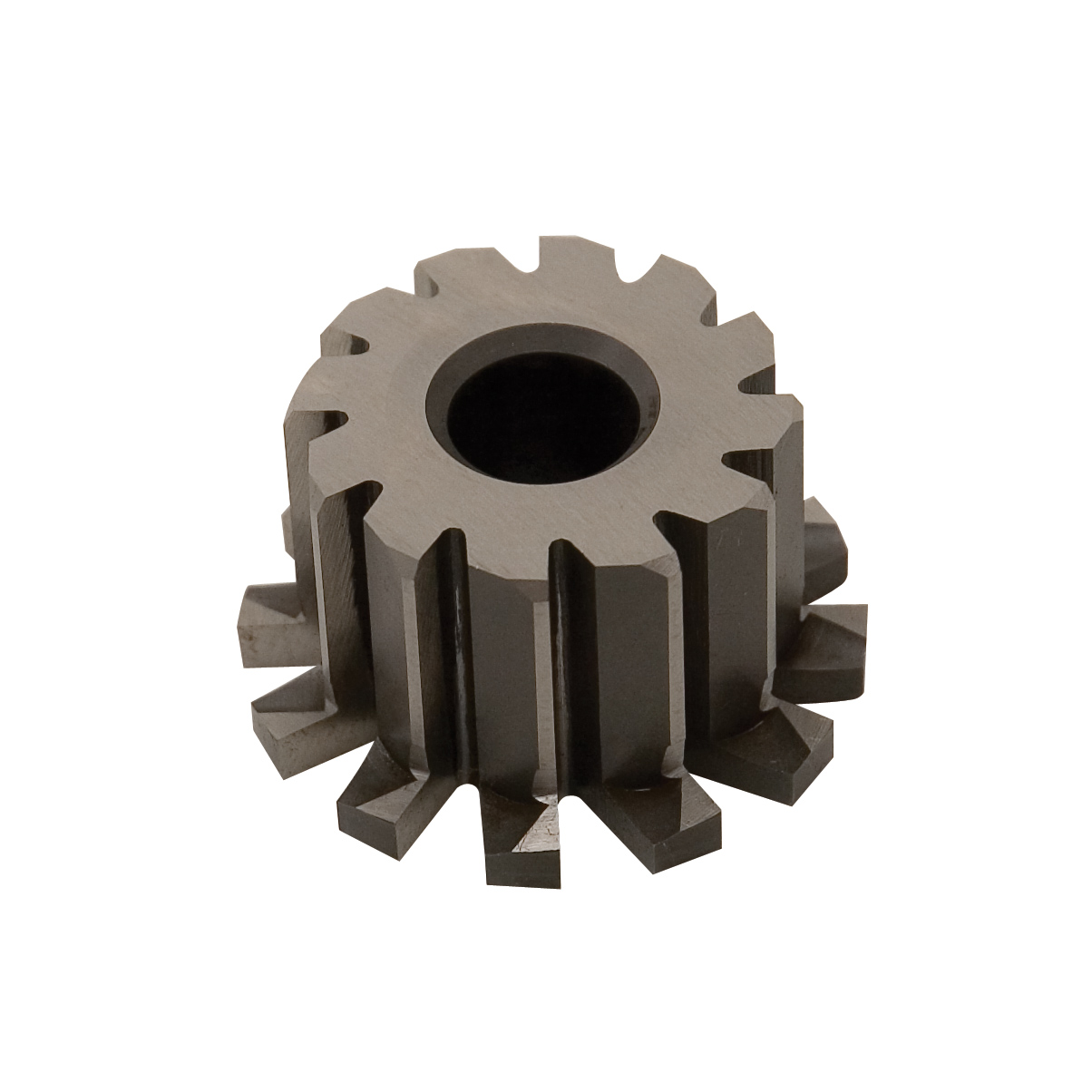 The Park Tool Facer/Reamer 758.2 is made for this standard. To press the OnePointFive standard cups use the HHP-2 headset press. 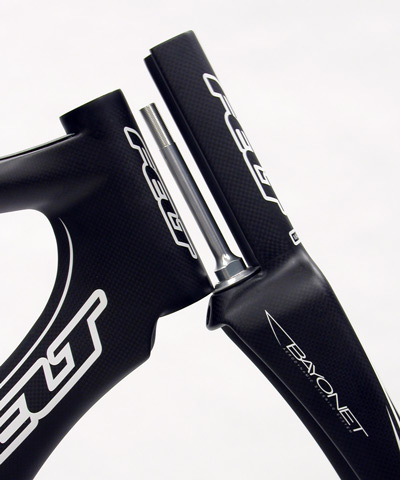 There are headset systems that are primarily proprietary and do not interchange with other standards. In the example below, there are effectively two steering columns. One passes through the headtube and supports the bearings. A second section of the fork is a fairing or cowling, and sits in front of the headtube. However, this fairing is also structural as it supports the fork and connects to the stem. 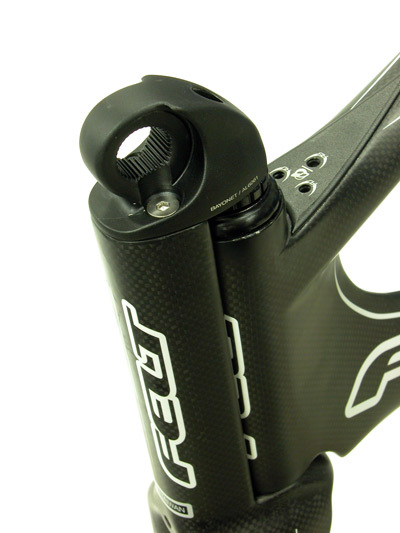 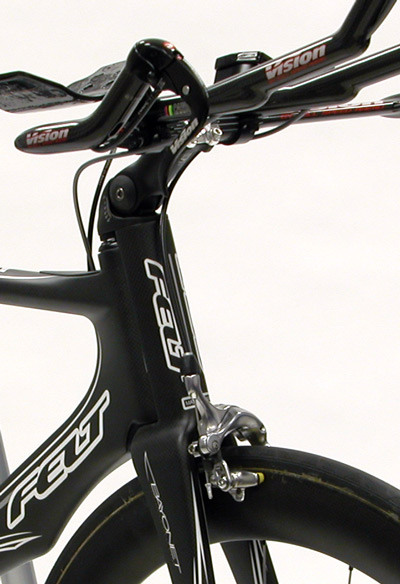 The various headset standards are outlined in the table below. An “interference fit” is also called a “press fit”, where the headtube is smaller than the cup/bearing. The cup is pressed into the headtube with force. A “slip fit” allows the bearing to be installed and removed by hand, with no pressing required. In a slip fit, the outside diameter (OD) of the bearing is smaller than the inside diameter (ID) of the frame.