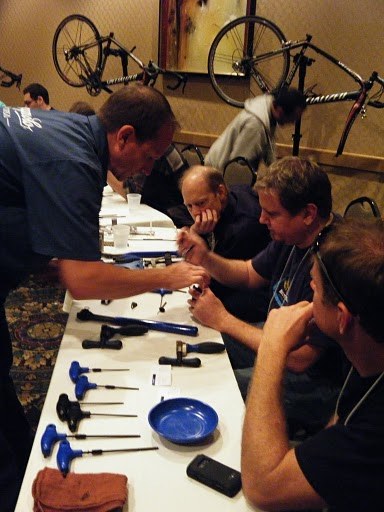 On February 2nd in San Jose, CA, Park Tool wrapped up our 2010 series of our Park Tool Tech Summit. This is the most noteworthy and effective program of field training clinics for bicycle mechanics in the country. This year we hosted 650 professional mechanics in three cities, Philadelphia, Chicago and San Jose. We were joined by 7 of the top component manufacturers in the world. Shimano®, SRAM®, Rock Shox®, Fox®, Mavic®, Hayes®, and Campagnolo®.

The two-day clinics allowed professional mechanics the chance to receive hands-on training on the newest technologies from these top companies and there was even a presentation by John Barnett of the Barnett Bicycle Institute.

For the second consecutive year, the events were praised by the attendees. A sample of those comments are shown below:

“Thank you very much for the continued support of the bicycle service industry and recognizing that continued education and training like the Park Tool Summit are the key to the sustained success of the Independent Bicycle Dealer. As the formula for and number of these events continues to evolve and expand it increases the overall value and professionalism of our industry.” — Mike Heenan, Crank Daddys

“I just wanted to thank you personally for your efforts on a successful tech seminar. As a 20+ year vet of this indy of ours, I can honestly say it was the most educational 18 hours I’ve ever experienced. I’m already looking forward to next year. You and Calvin have my utmost respect and appreciation.” — Paul Watson, Race Mechanic

“I thought the experience was great. This was the first time I attended and I paid for it out of my own pocket. It was everything I had hoped for and more.” — James Bruzzese

“Thank you and Park Tool for the Summit...it really was full of a lot of information we can use. I have already learned better ways myself to train our staff and the new technical information was priceless. The Summit is worth WAY MORE then what it costs as we chatted about and as long as you have it I will attend every time from now on.” — Dave Vance, Erik’s Bike Shop

“Again, thanks for a very well hosted event...I’ve been turning away hydralic disc brakes because of lack of knowledge and time...I had no command of what I was doing even though as it turned out I was doing a pretty good job...(it pays to have theory)...but this class I took from Hayes, Avid, and Shimano all had totally awesome hands on and professional FACTORY instruction. I also attended Mavic, and Campagnolo classes which were also totally informative and cool to see...” — Brian Backus, Trailside Cyclery