It is difficult to go through life and not wonder if you are doing anyone any good. As the 2008 Olympic Games begin, it gives me pause to think about what I have done, or not done, for, well, the world.

I would like to believe that my path through life, like my path through cycling, has done someone some good. When I began my wrenching, years ago, I was in some important ways very different then now. Back then, the technical aspects of the bicycle fascinated me, but I could do without the people. My attitude as a shop mechanic was “...just give me the bike and go away. It will be perfect, just come back later.” Cycling was all about the engineering.

Later, as a young mechanic with the US Cycling Team, we would travel overseas and race against what our President would call “The Evil Empire.” While there was nothing in print, there was a palpable sense at the US Olympic Training Center that we were to go out and “beat the Russians.” This attitude became very useful for travel. When returning from a trip, the team would wear the “USA” team clothing. US Custom’s would invariably ask where we were returning from. When we would explain it was from an international cycling race, the default question was always, “Did you beat the Russians?” Well, of course we said that we beat them. Straight through customs we’d go, bike bags packed with anything we wanted.

I would later work with the US Team in Guatemala, in the early 1980’s. It provided a tough proving ground for young up and coming riders. Levels of security with varying degrees of armament surrounded the race. These were some of the most repressive years that country has seen, and I have to wonder if our racing there helped the people of Guatemala, or if our presence gave legitimacy to the ruling party. As a mechanic, I was not asked for my opinion. 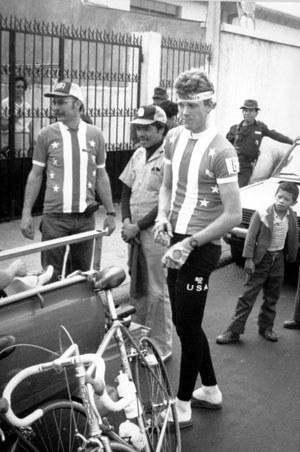 The US Team manager with a USA rider before a stage start in Guatemala, with protection watching us all the time.

Did the cycling team hate the Communists, the Russians, the Evil Empire? No, I can say there was no hatred, but there was great respect. You learn working on the road to get along with everyone. One of my toolbox treasures is a cheap spoke wrench from a mechanic working for what was then Czechoslovakia, a satellite of the “Evil E”. The thing tends to round out nipples, but it was a gift from a friend. We only conversed in German, not a tongue native to either of us. Experiences like that gave me hope of a better world.

My Olympic moment was 1984, in Los Angles. The “Evil Empire” was not present, due to their turn-about-is-fair-play boycott. The 1980 Olympics in Moscow were boycotted by the USA, as our President taught the Soviets a lesson for invading Afghanistan. Ironically, this power play would revisit the world and cycling 17 years later. The Games are really, in the end, just games. Perhaps nothing more should be made of them, but then again, it should be enough that these elite athletes have gathered together in one place at one time.

Now, after many years fixing bikes, I can see where I was mistaken. While part of me still believes in happy, contented bicycles, I realize now my role as a mechanic is really to make people happy. The bicycle, effectively, is my tool of choice. You cannot make a bicycle perfect without knowing the person. There is not an “ideal” bike, no template of perfection, no bicycle paragon of virtue. The bicycle needs to deliver what the user expects, and the mechanic must learn to coax out of the user those needs. The mechanic then applies their technical knowledge to tune, fix, and or fit the machine to the rider.

In conclusion, do I feel bicycles will make the world a better place? I think perhaps not, but perhaps that is the wrong question. Would this be better place if people worked on building a world that was safe for children (and me,too) to ride bicycles? I think you know what my answer is to that. 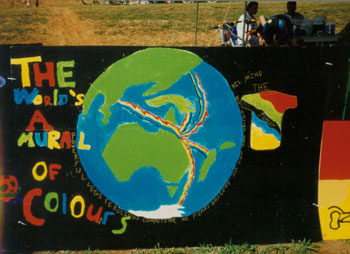 Posters made by school children for the 1997 MTB World Championships. They believed in us, in the sport, in cycling.