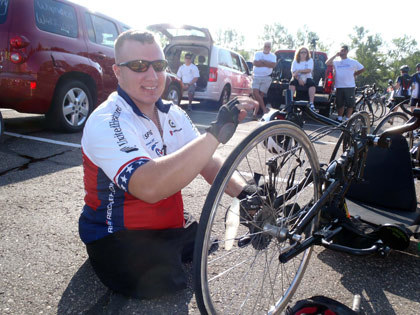 Nate Hunt with his machine

The Ride 2 Recovery is a non-profit organization that sponsors rides around the USA for injured military veterans. Ride 2 Recover considers cycling an important part of the recovery process. It is something most all of the patients with mental and physical disabilities can participate in, and it’s just fun.

The Ride 2 Recovery was in Minnesota August 23 for the Great Lakes Challenge, and I was able to offer some support. A bicycle mechanic can be viewed as a facilitator, a link between a machine and a person, and this aspect is clear at an event such like this. The bikes had to fit the rider. Sometimes we were asked to just change pedals. Sometimes more was necessary.

I am very intrigued by the hand-crank machines. These were used by people without use of their legs or without legs at all. Nathan Hunt is now a retired Army Sergeant. His legs were severed in an explosion while on patrol in Bagdad, Iraq in 2008. At 41″ tall and 165 pounds, his huge arms power a Top End Force Handcycle.

Just grabbing the hand cycle to work on it was interesting. There was no good way to get the entire unit up in the air, but the drive train operates at the front end, so that was enough.


The drive train is all bicycle parts. However, both steering and crankset are in the same place and operate at the same time. Look again at Mr. Hunt and his machine. Notice the front and rear derailleurs are both upside down. The chain is tensioned between the guide pulley and the chainring at the front derailleur. The rear B-screw must be a bit tighter as the weight of the derailleur is pushing downward on the rear derailleur. On the front derailleur cage, there can be some drag on the cage when the chain is in the biggest ring and on the larger rear cogs. With a system “right side up” you do not see this issue, but the image below shows just how close it is. 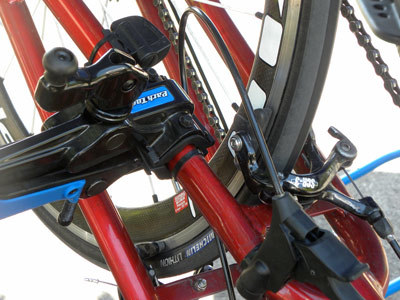 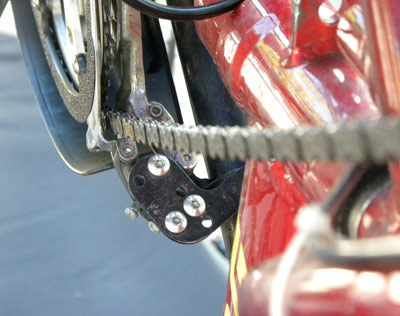 The image is not upside down. Note the chain sags as it travels to the crankset. It may rub in some combinations.

The steering system includes a steering damper. This one had the lower threaded stud shear from the rubber. I attempt a repair with the mighty JB Weld. The parts are clamped and allowed to sit overnight. 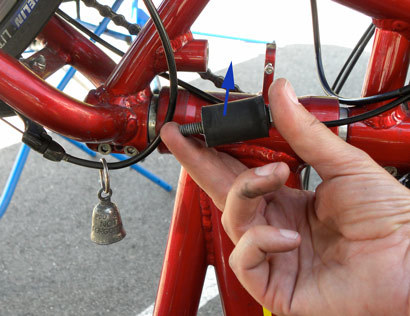 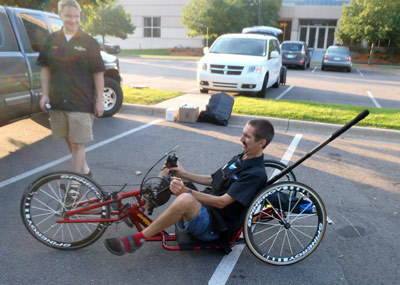 John Bemel of Freewheel seems amused at my attempt at a test ride, as he should be. It was a difficult vehicle to manage, especially with legs in the way. 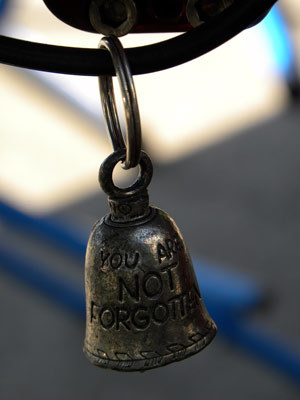 This is not an "on your left bell," but a "gremlin bell" mounted to Mr. Hunt's bike. Even the best-prepared bike can be beset by the road gremlins. However, the sound of the bell drives them crazy, and they crawl inside to stop it. The bike and rider are then safe from their mischievous ways. 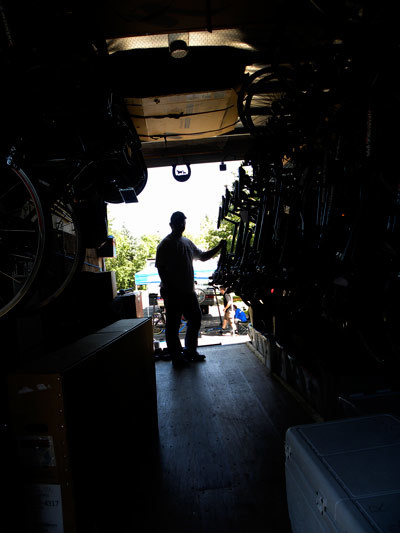 At all events such as these, there are people in the shadows, doing the hard work, not seeking stage or glory. Dave Blackmon (OK) is just such a man... 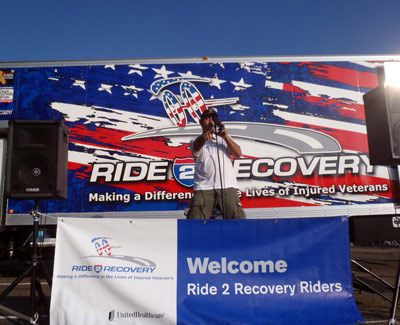 ...except when Neil Diamond's "Comin' to America" gets pumping. Then "Uncle Dave" is quick to get on stage to show everyone his moves. 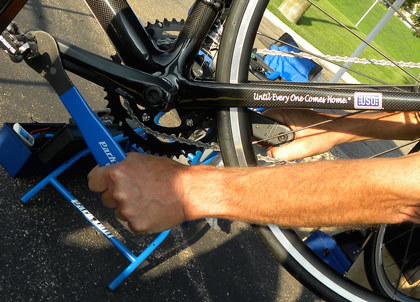 The USO is one of the sponsors, and their chainstay sticker makes clear their intent

If you are a mechanic, I recommend you consider volunteering at these events should you be given the opportunity. There is interesting work and you leave feeling you have done someone some good. For the Great Lakes Challenge 2010, day to day support is provided by Freewheel Bike Shop. 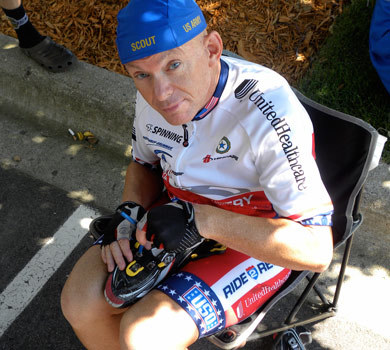 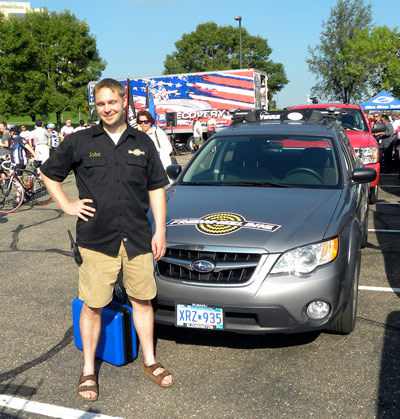 John Bemel of Freewheel looking fresh and ready to go. How will he feel by the week's end?

Nate Hunt repair update: The steering damper repair failed due to cohesive failure between stud and rubber. Too bad: I hate being defeated. 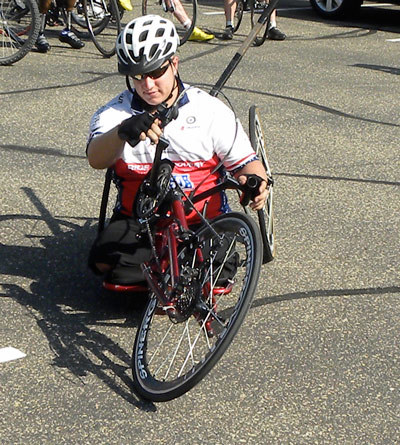 Mr. Hunt applies a lot of steering force to the damper, and not even JB Weld could offer a solution. Time for a new damper. 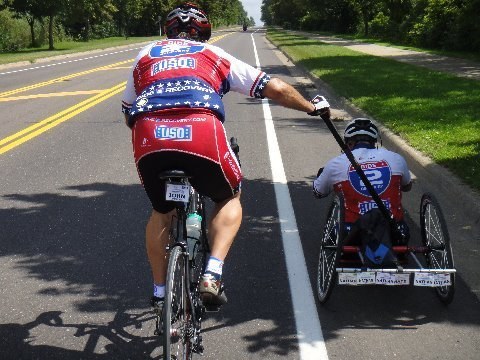 The hand cranks sometimes need a little help going up hill, hence the shaft for a push... unless John is just is catching a ride? (photo credit Russ Brock)