A Visit with Julien DeVries, Chief of Mechanics for the Discovery Channel Cycling Team

The 2006 Discovery Channel Professional Cycling Team gathered recently for their annual training camp and I was honored and excited to be a part of it. This year’s camp took place in Solvang, California from January 14th to 27th. This is the time when the riders and staff begin preparation for the coming season. The rolling hills of California’s central coast provide a great place for the riders to establish a base fitness level, as the mechanics and support staff are learning about the new equipment and the needs of the new team members. Since Park Tool is the official tool and maintenance equipment supplier for The Team, I was there to visit the mechanics, learn of their needs for the coming year, and show off this year’s new tools. 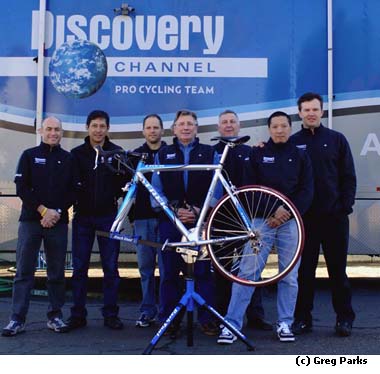 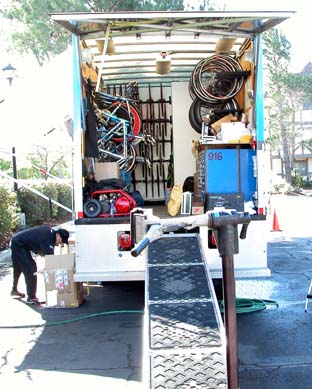 The Discovery Channel Professional Cycling Team truck is tightly packed with gear, but all tucked away and carefully arranged 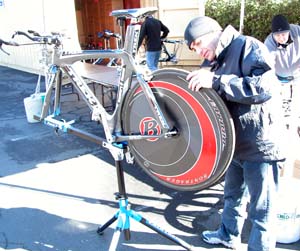 Geoff Brown prepares a time trial bike. These bikes are then packed off to Carson City for testing in the wind tunnel... with riders attached.

The seven Team Mechanics arrive three days before the riders to build the bikes. There are boxes of bare frames, un-sized forks, and a mountain of component parts. Everything is carefully assembled and set to the exact specifications and measurements of each rider. When the rubber hits the road, there should only be fine-tuning that is left. The mechanics see that everything is properly built for the camp and ready for a successful season of racing.

Julien DeVriese is the Chief of Mechanics for the Discovery Channel Professional Cycling Team. This year, he was joined by all seven mechanics in Solvang. Besides Julien DeVriese (Belgium), there was Chris Van Roosbroek (Belgium), Vincent Gee (USA), Juan Lujan (Mexico), Alan Buttler (United Kingdom), Geoff Brown (Canada), and Craig Geater (New Zeeland), the newest mechanic to the team. 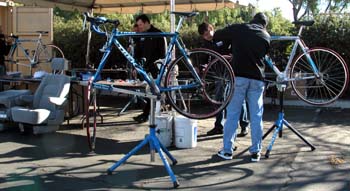 The staff "bike shop" is set up in a parking lot.

Since there is rarely time during the race season for an interview, Julien and I sat down at the camp to a talk about the work he does and about his long and storied history as a professional mechanic. 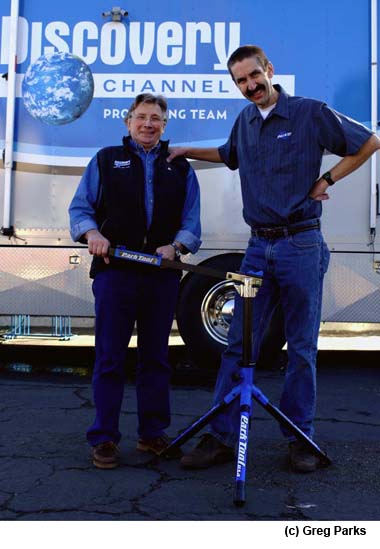 Juline DeVriese with Calvin Jones (Calvin with the moustache)

CJ: Where do you call home?

JD: (Speaking English with a Dutch accent) I am living in the neighborhood of Gent, in Saint Martens-Latem, about 50K from the Service Course. For us in Belgium, that’s far away! The Discovery Channel Cycling Team has a home base shop called the Service Course, that is located in Brakel, Belgium. Julien, Geoff, Juan, Chris, and Craig all live in Belgium for most of the season, as it is centrally located to most European races.

CJ: You’ve been doing this a long time. Is this a job you would want your grandchildren to do?

JD: No, no. My grandchildren, I have two girls and two boys. It’s a hard life, you know Calvin. Mechanics are always away from home. And I remember, I was so much away when I was with Eddy (Merckx), while in the winter he did the 6-day track racing and I was also away. One year I was coming home and my youngest son was crying. He don’t remember me. That’s hard, eh?

CJ: When was your first work at the Tour de France?

CJ: So how many Tours total have you worked?

JD: Many, something around 45.

CJ : How did you get started as a bike mechanic?

JD: I was trying to race. And, I realize I cannot be... I did a couple of races with the professionals, so I understand immediately I have no future on the bike. So I don’t like the bike so much. I was with the amateurs, and my father wanted me to go help the man in the bike shop. That’s how I learned.

CJ: Have there been many changes on the bikes from the early Tours to now?

CJ: Have there been other changes in the way the teams are run?

JD: Yeah, when I was starting, the big trucks and big buses, no way. My first Tour de France, we have only a small truck. It was for suitcases and parts for the mechanics. That’s the only thing we have. Then we had 2 cars. While the soigneurs were riding in the truck from hotel to hotel, one car for following the race, and the other car did the feeding zone. It has changed a lot. We had only two mechanics, and two soigneurs. Now we go to the races, we have 5 different wheels. Back then, 36 spokes, and 2 or three pair of 28, that was end of the story.

CJ: How many bikes does the each rider have for a season of racing:

CJ: Are the bikes easier to work on now?

JD: It is easier to work now. In the 60s, when you have two days of rain you must open all bottom brackets and all the headsets. Now, it’s much easier. Just change... finished. But the tubulars in the 60s and 70s, they were much better than now. Silk tubulars, lighter, nicer. Now they ride with clincher. Silk tubular was nicer. You know we don’t have work stands in beginning. You know that? No work stands, eh. There was a small thing for the bike, but no work stands. Look, your tools and everything now, you see, now it is easier. Before, you must take a look because you have three threads, British, Italian and French thread. You know this? And when they send you a pair of pedals of French thread, that’s bad. Now all these things are gone. You only have bottom brackets that could be different thread, and all the rest is the same.

CJ: What are the hardest days for the mechanics?

JD: When it rains, yeah, and the days of the time trials. You start early in the morning and working late in the day for only 5 or 10k’s. Warming up, changing wheels, this, that, busses, and only for 5K. That’s the worst days for the mechanics, the time trials. You are all day on the run for only a few kilometers

CJ: When are the good days for mechanics?

JD: Short stages, flat, and nice weather. Look, Calvin, you must love to do it. Look at my age. I am still happy to do it. We do not do it for the money. Every Saturday, Sunday, for the whole year, you are weeks away from home, you work early to evening. You must like to do it. A lot of people say, “Yeah, yeah, we want to do it.” Three days work, then they go home and you never see them back. Everybody thinks, the race is over, it is finished, no more work. Then the work starts for the mechanics. When you are 6–7 hours in the cars, and then you come out of the car, and it is bad weather and raining, believe me, it is not pleasant.

CJ: Were there mechanics you learned from when you were young?

CJ: Who is the best mechanic on Discovery?

JD: I cannot say this, I know who is the best, but I cannot say it. This mechanic must be fast and good. You can see immediately who is a good mechanic or who is a bad mechanic. A bad mechanic is going to try 20 times a derailleur, while he is not sure of himself. While a good one, is tick-tick-tick, clack-clack-clack, finished, done.

CJ: What is your favorite piece of memorabilia that you’ve collected over the years?

JD: I have nothing, nothing. I have only the World Championship jersey of Lemond, a yellow jersey from Eddy and the seven yellow jerseys from Lance. My nice things are my memories.

CJ: What was the reaction of the riders and other mechanics when you were featured in your own Park Tool ad a couple of years ago?

JD: Some of the other mechanics were jealous,(laughs) but for the others, it is okay. To me, it was an honor to be in the Park Tool catalog.

CJ: What is your favorite tool?

JD: My favorite tool? I have a lot of favorite tools. My top three, is the PRS-21 work stand to start with. Yeah Calvin, the Y-wrench, with the 4-5-6 (AWS-1) and the Spoke Wrench. These are the favorite tools of our mechanics. And Calvin, these are the best tools in the world, man. Calvin, Park Tool is very helpful for us. They are making our job very easy. We are very very lucky we find a sponsor like Park Tool. Thank you very much to Park Tool from what you have done for Discovery Team. 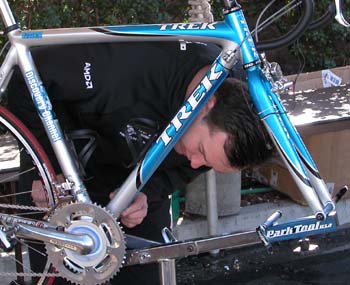 Chris gets close to his work. 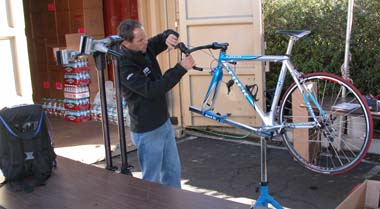