This article with discuss the concept of chainline. See also related article on frame alignment.

There are two related aspects to the term “chainline.” First, chainline can be defined as the position of the cogs or chainrings relative to the center line of the bike. The bike center line is an imaginary plane running front to rear through the middle of the bike. For example, a front crankset and/or front derailleur might be designed to have a chainline of 47.5mm. This means it will work best when the middle of the crankset is 47.5mm from the middle to the bike center line.

The other aspect of chainline refers to the relative position of the front and rear cogs to each other, without regard to the bike centerline. This is called “effective chainline.” A bike may have the crankset inward or outward some distance of the rear cogset center, regardless of the center line of the bike.

Drive train manufacturers generally do not specify “perfect” or exact center-to-center alignment between rear and front cogsets. The front chainrings are often designed be a few millimeters outward relative to the center of the rear cogs. Additionally, drive train manufacturers do not generally consider all gear combinations to be “useable.” For example, which may be sold as a “27-speed” with three rings in front and 9 cogs in the rear will not have 27 useable gears. It is likely when the chain is on the smallest ring in front and possibly the smallest two, three or even four cogs in back the chain will rub the side of the middle ring. This should not necessarily be considered a “chainline” error. If the front ring were moved outward until there was no rubbing in these combinations, the result would likely be poor shifting in other gear combinations, such as the largest ring and the larger rear cogs.

Bicycle shops commonly recommend against “cross-chaining” which is using the smallest rear cog with the smallest front ring, or the largest rear cog and the largest front ring. Bicycle chains are quite flexible, and will work well at various other then perfectly straight. Cross-chaining is primarily an issue when the chain hits the front rings. As a simple rule, if a gear combination causes a rubbing problem, avoid that gear.

The front chainrings should to be within a certain distance of the bicycle center line. If the rings are too far in or too far out from the frame, the front derailleur may not shifting properly. The position of the front rings is in large part determined by the length of the bottom bracket spindle. Many bottom bracket spindles are specified with a certain chainline number, such as 47.5mm or 50mm. Spindles are also specified by spindle length, which is simply the length end-to-end. As an example, a particular bottom bracket may be specified with a 47.5mm chainline, and a 113 spindle length. A crank arm designed for use with this spindle will have the middle of the crankset 47.5mm from the bike center line.

Often, the combination of crank and spindle determine chainline. This is especially the case for the square-type spindles because the exact fit inside the square fitting of cranks varies between brands and even between arms of the same model. It is sometimes necessary to simply guess at a bottom bracket for a bike, install the crank and then measure the results. The results will then let you know if a longer or shorter chainline spindle should be installed.

The accuracy of measuring for chainline is limited by the accuracy of the frame. If the bottom bracket or frame tubing is not centered, the chainline measurements may be off. In our example here, we will assume the frame is aligned and shell is centered. Begin by measuring the diameter of the downtube, and divide this number by 2. In our case, the seat tube is 44mm, so it is 22mm from the right side edge the tube the bike center line.

It is possible to determine the chainline of the rear cogs. If this number it to be compared to the front ring, it will be assume the frame is aligned, or that you account for misalignment in the calculations. See Frame Alignment. 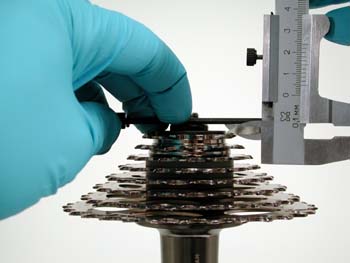 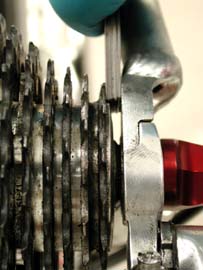 To help speed the process, find below some typical cogset measurements. It is always best to measure your own set, as these numbers may not represent your cogs exactly.

As an example, assume some hub is 130.6mm wide at the locknuts. The bike is a Shimano® 8 speed. The cogs are about 35.4mm wide. Assume we measure the outer cog to frame and find it is 4.5mm. 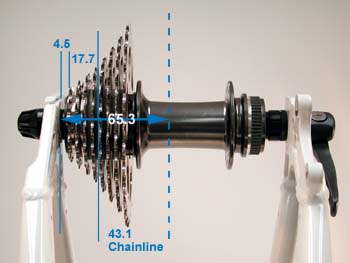 The rear cog middle is effectively 43.1mm from the bike center line. The front chain rings should be about the same distance from the center line. It is possible, however, to still have acceptable shifting with less than perfect chainline. Manufacturers typically specify a front crankset chain of slightly longer than the rear chainline. In this case, as 45mm chainline would likely work. A 50mm chainline would probably be too long.

If either the front or rear sprockets are either too much inward or outward relative to the other, there may be certain shifting problems. However, if a bike chainline measures off, yet the bike has no problems shifting, the bike should be considered acceptable. No “fixing” of the chainline is then required. The following are typical problems that may be caused by chainline issues.

Generally, the shorter distance from the bottom bracket to the rear hub, the more likely a rattle from gear combinations will occur. There may in fact be several gears that are unusable on any given bike. It is possible to minimize or eliminate this problem by moving either the front or rear cogs. Even if the bike has a so-called perfect chainline, it may help the riding and shifting to create an “error” to solve existing shifting issues.

Chain line gauges helps determine effective chainline of the front and rear gears. The tool references off the rear sprocket center and extends this line forward toward the front rings.

To use the (discontinued) CLG-2 chain line gauge, begin by checking the centering of rear wheel in frame. It should be centered between chain stays. Begin by getting the chain out of the way. Shift chain to smallest freewheel cog, and the innermost chainring (smallest ring). It is sometimes necessary to drop the chain off the front chainring onto the bottom bracket so it does not strike to CLG-2. 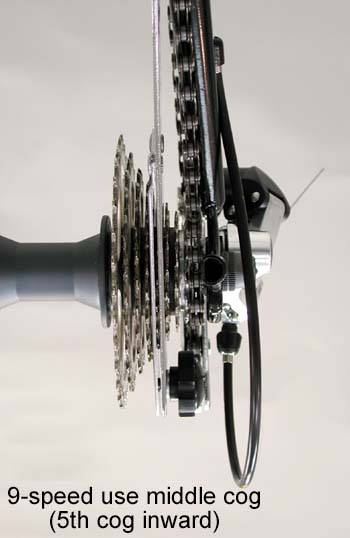 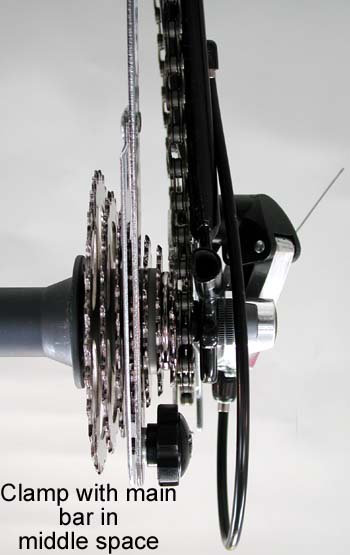 Extend sliding gauge close to chainring, but do not allow contact with chainrings or the front derailleur. Most freewheels and freehubs have play. After clamping gauge, move CLG-2 end side to side, and hold end to center of play for most accurate reading.

NOTE: Most component manufacturers do not design drive trains for “perfect” or center-to-center alignment. It is common for the chainrings to be slightly outward of the rear cog chainline by as much as several millimeters.

For even numbered rear cog sets the CLG-2 clamps over the cog inboard of the cog set center. The main chrome arm, not the black sliding gauge represents the rear cog set center. It is therefore necessary to estimate the center where the end of the gauge points at the front chainrings.

For three ring cranks, the sliding gauge should point inboard, or just to the left from the rider’s point of view, of the middle ring.