The cantilever caliper rim brake is found on some cross country touring bikes, cyclo-cross bikes, and older mountain bikes. Cantilever caliper arms attach to separate frame pivots on either side of the wheel. The inner-wire attaches to a carrier piece located above the tire. The carrier is pulled upward causing the caliper arms to swing in towards the rim braking surface. 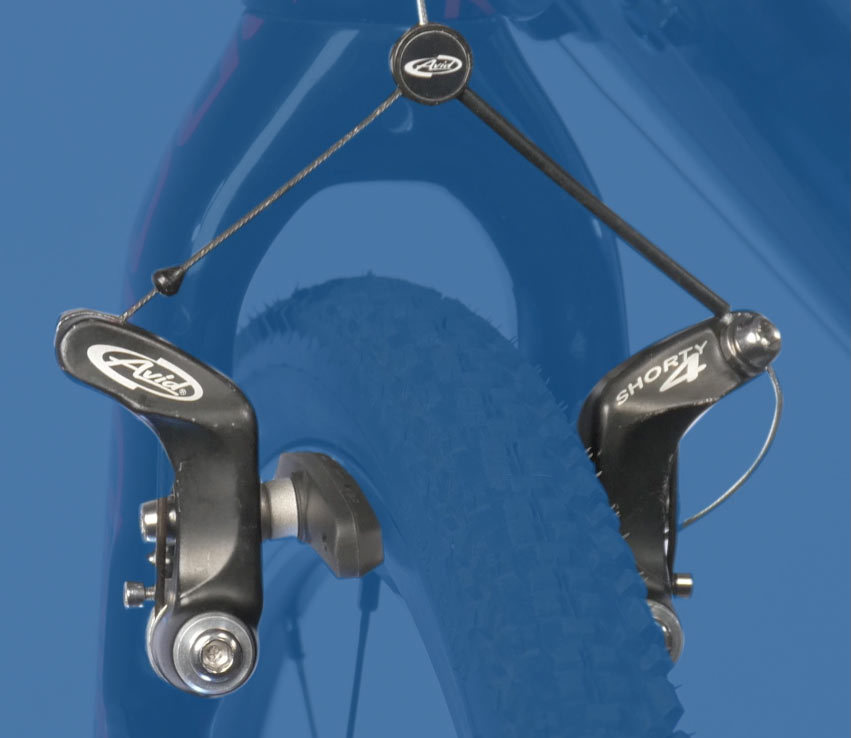 Cantilever caliper arms are attached to the frame or fork on fittings called “braze-ons,” an 8mm diameter by 16mm long stud fitted to the fork or frame. When installing brake arms, grease around the outside of the post.

There are frame and fork designs offering different hole options for the caliper arm return spring: an upper, a middle, and a lower. If the uppermost hole is selected the spring is wound tighter for a more powerful return spring. The lowest hole option winds the spring less and is a weaker setting. Generally, the middle hole is a good place to begin. On the second caliper it’s important to select the same mounting hole you did on the first brake. 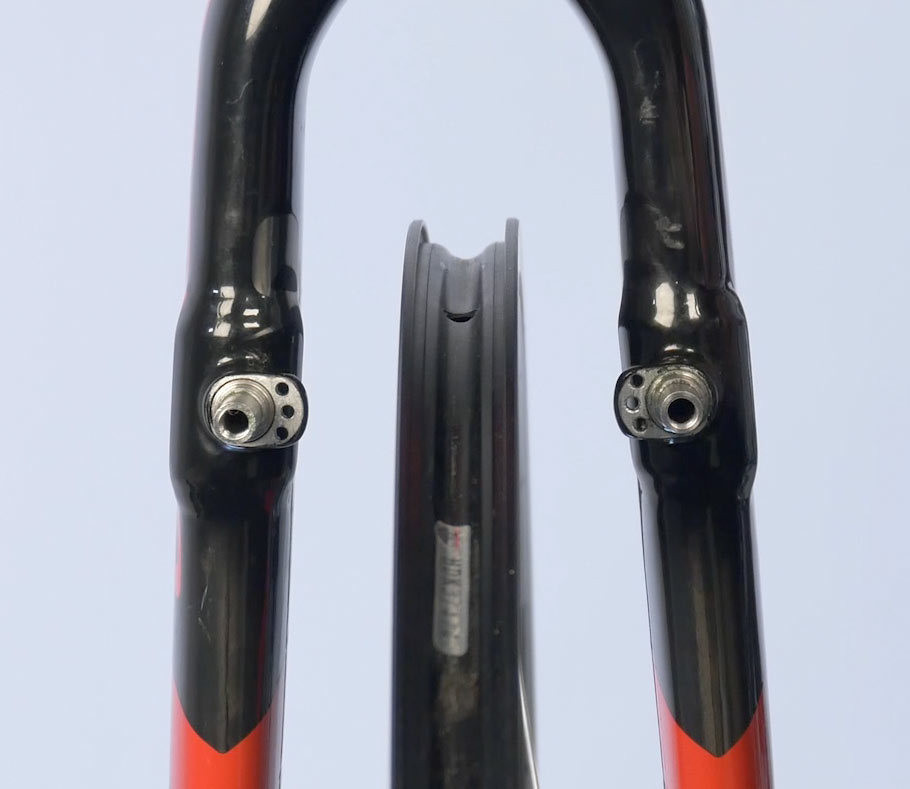 Because the mounting bolts are a fairly low torque, it is recommend to add a drop of thread locker inside each boss. The manufacturer’s torque recommendations for mounting bolts is typically between 4–6 Nm.

The “threaded stud” style of cantilever brake use a series of convex and concave spacers (washers). On each pad, there will be both a narrow set and a wider set of these spacers. Moving the thicker set from inboard to outboard of the arm will change the angle caliper arm relative to the rim and to the other arm. 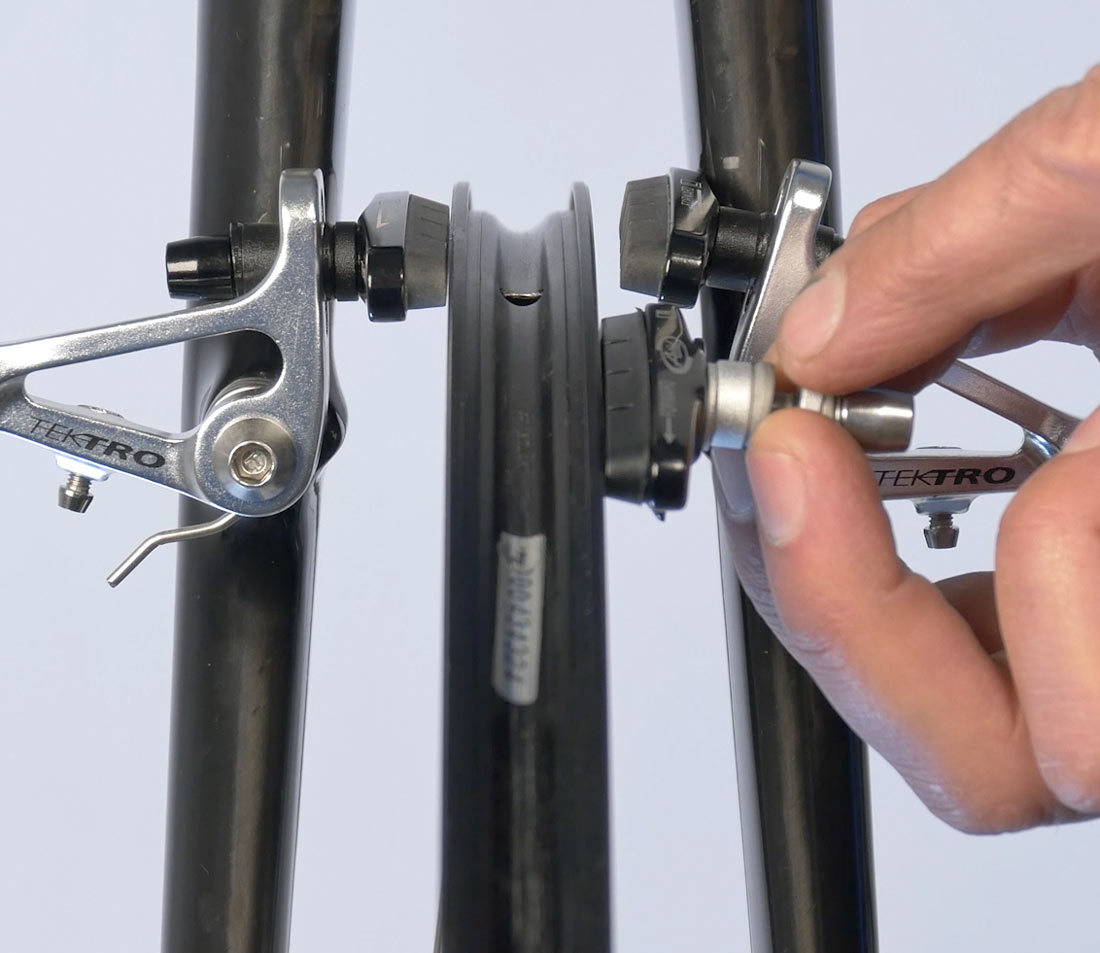 Spacer orientation between caliper and pad 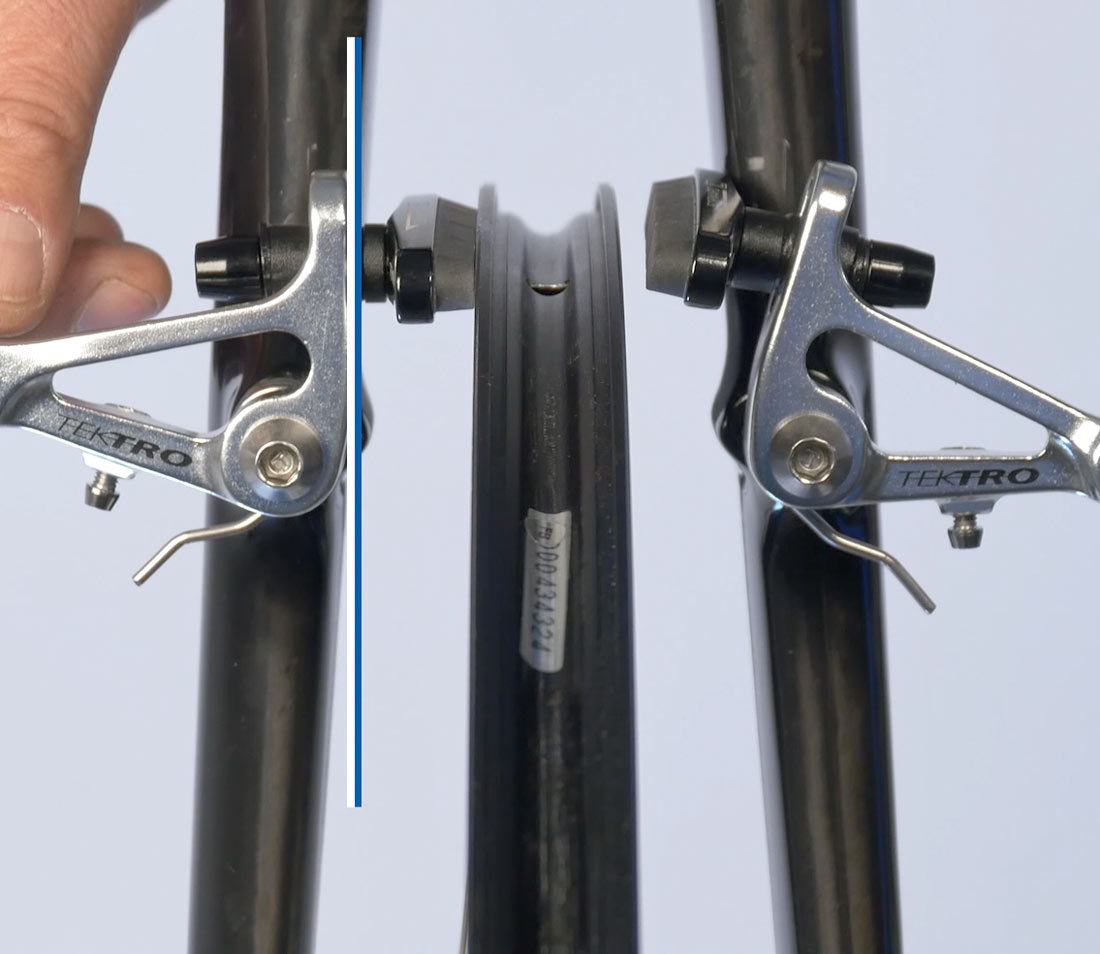 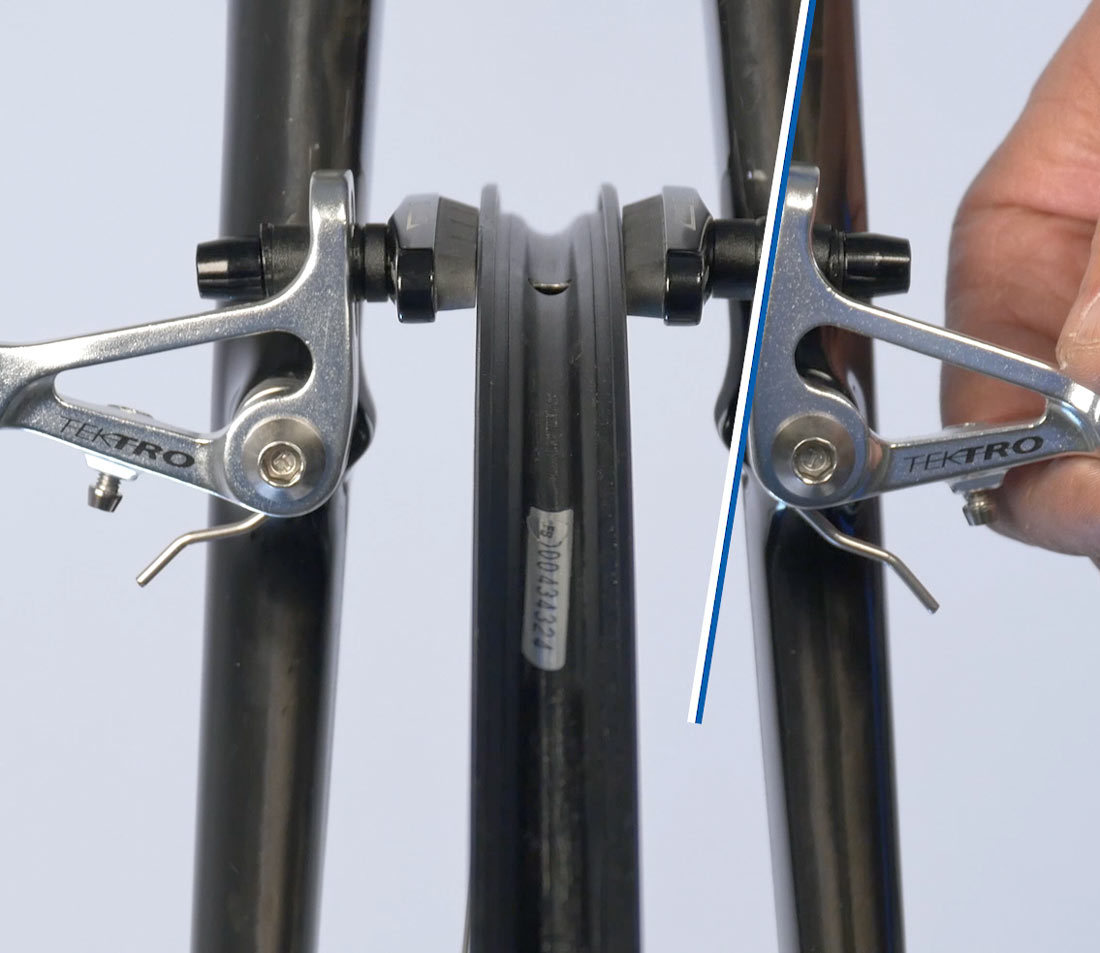 To move the spacers, begin by loosening and remove the brake pad nut. Note orientation of current spacers. The convex side of one spacer should be facing the concave side of the adjacent spacer. The flat sides of the spacers will go against either the brake arm or the lock nut. 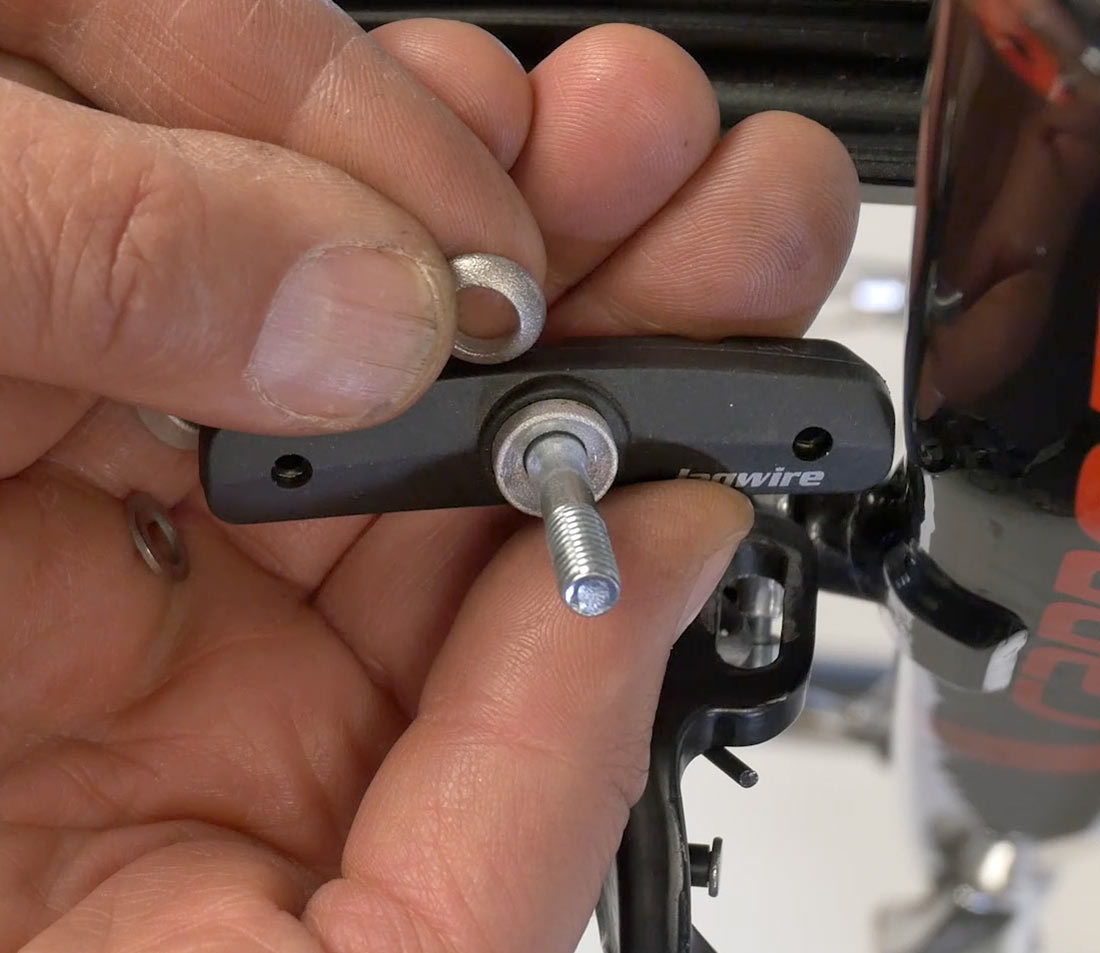 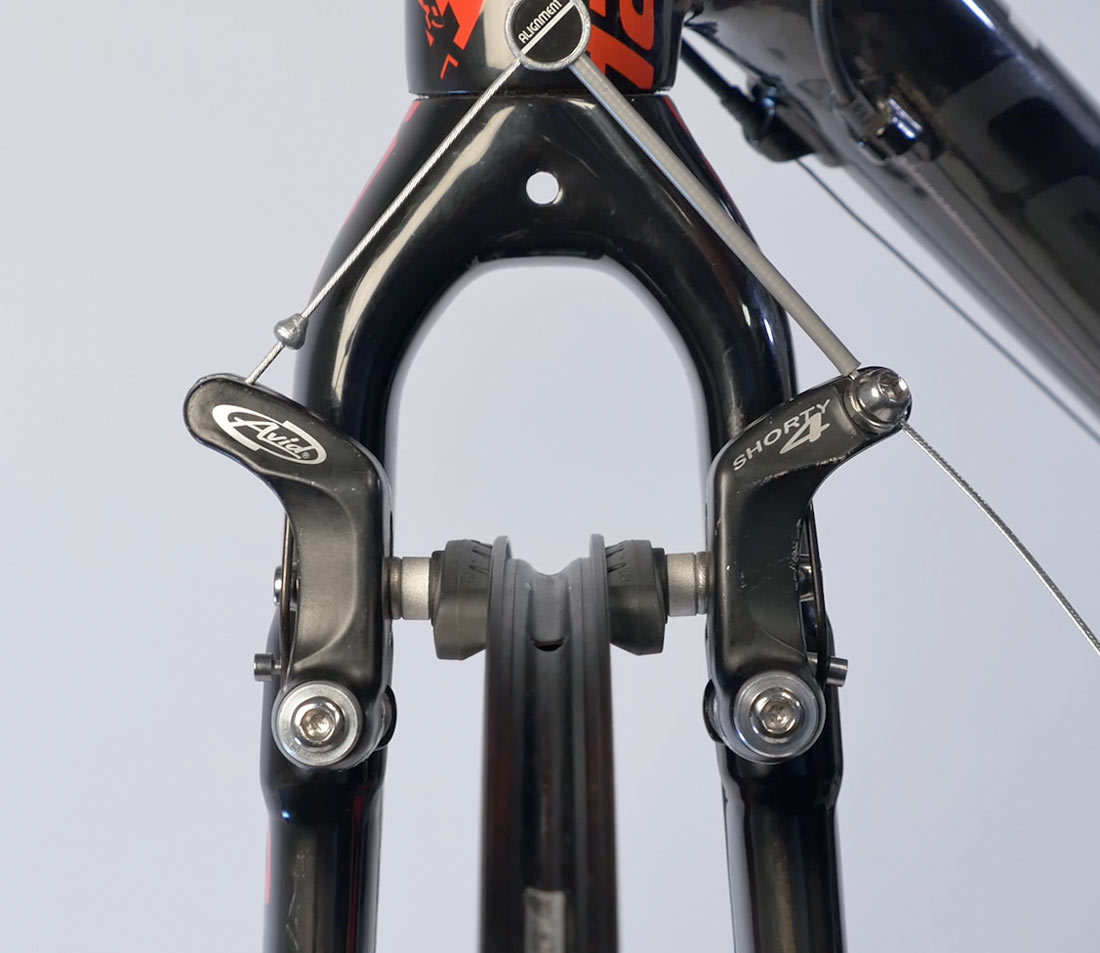 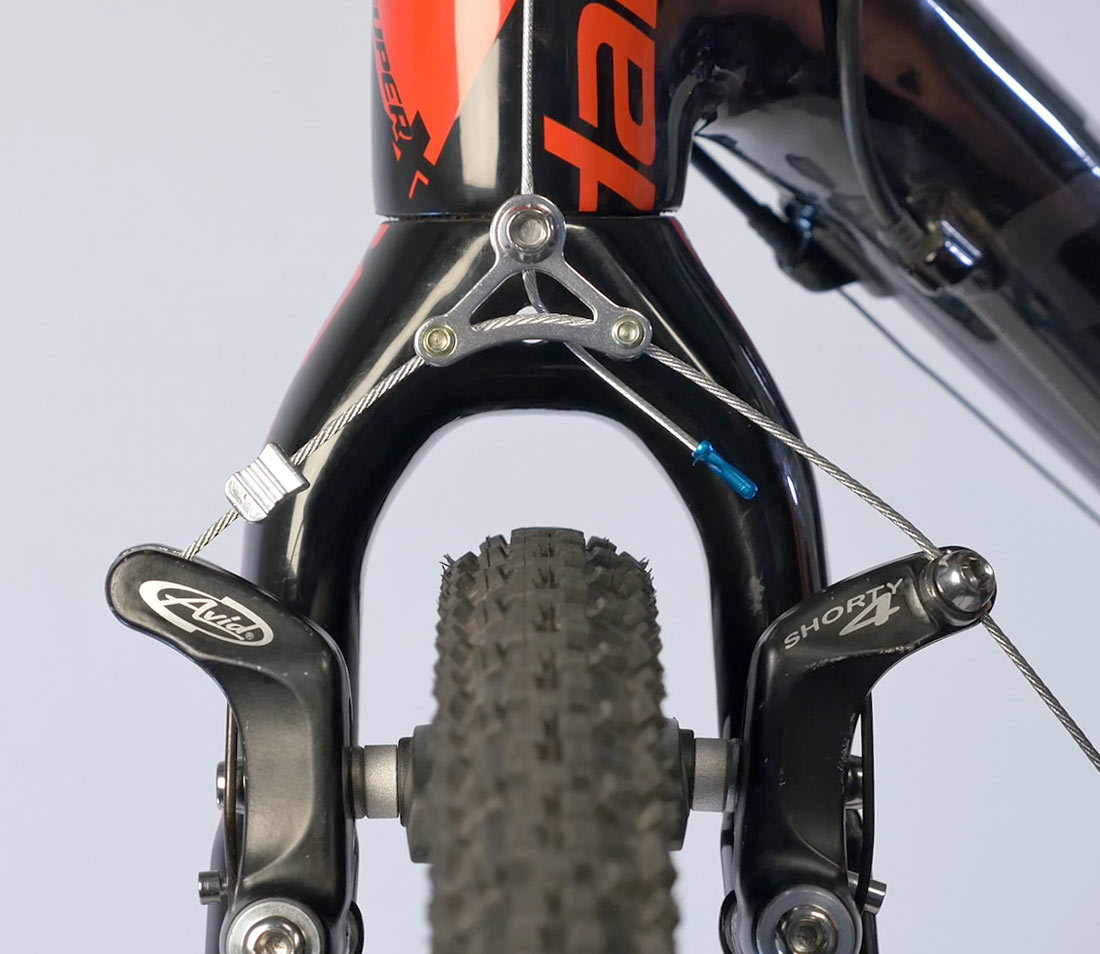 Pull the caliper arms up to the link unit and inspect the position. The caliper arms are in the best mechanical advantage when they are parallel to one another. 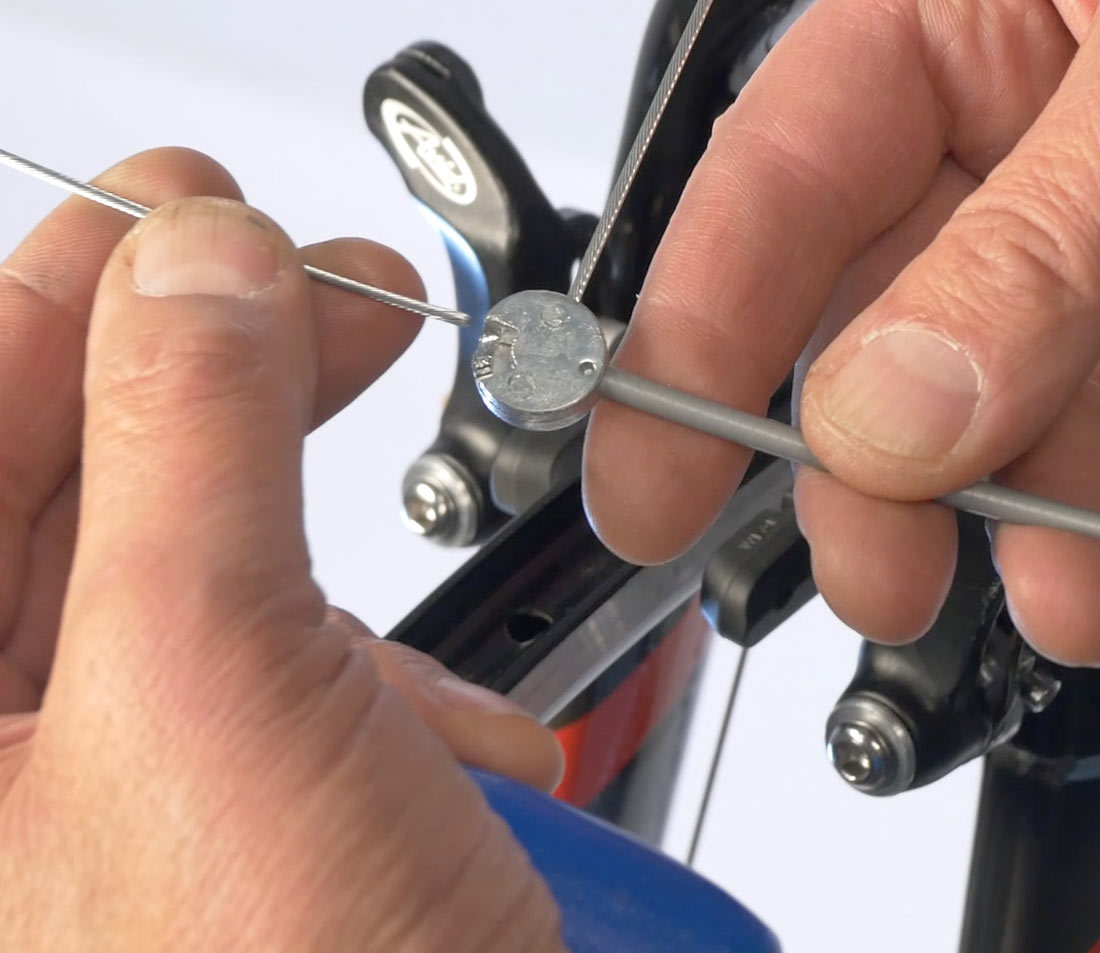 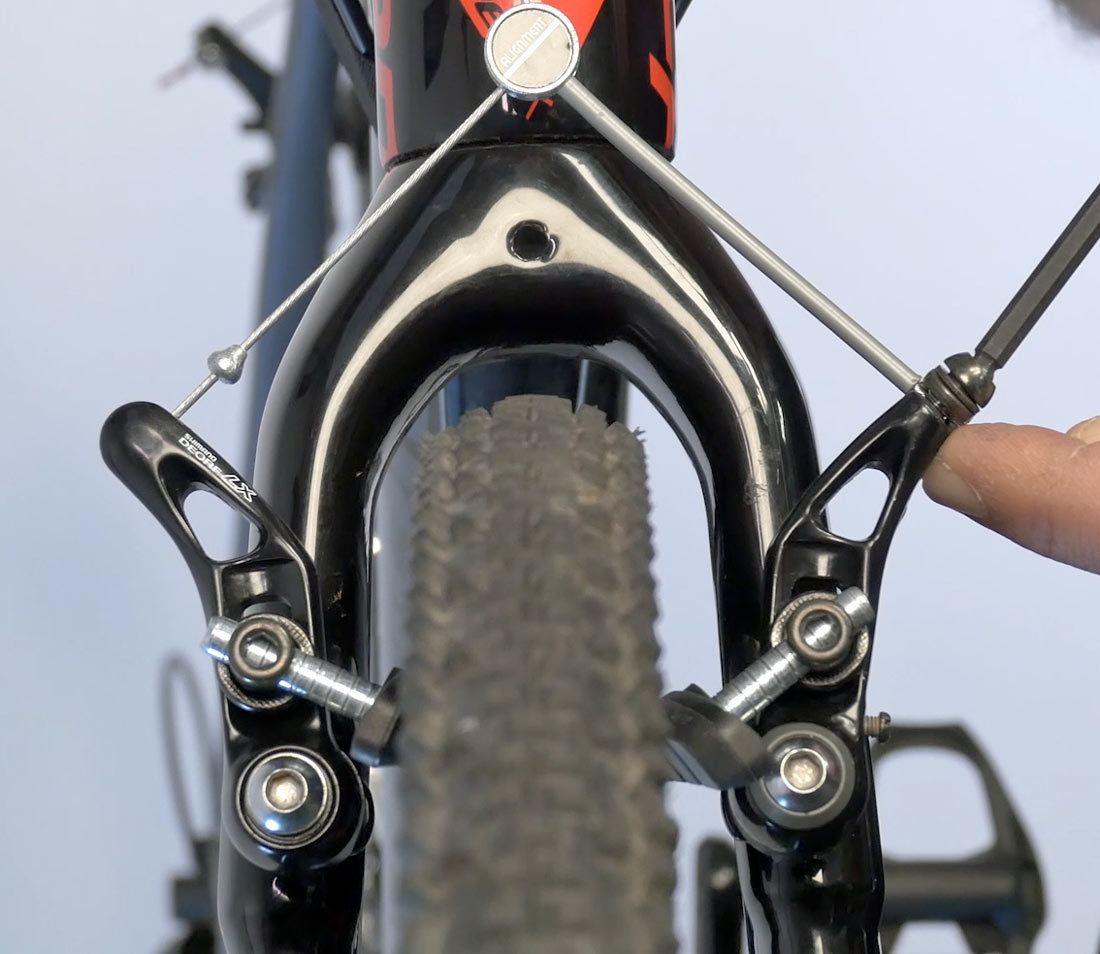 The cable carrier attaches directly to the primary wire from the brake lever. The carrier can be varied in height. If the carrier is secured too far up away from the brake, it will have insufficient mechanical advantage on the caliper arms. If the carrier is secured very low, the straddle cable is going to interfere with anything the tire may pick up, such as mud. The carrier should be no lower than the bottom edge of the fork or the bridge on the seat stays of the bike. 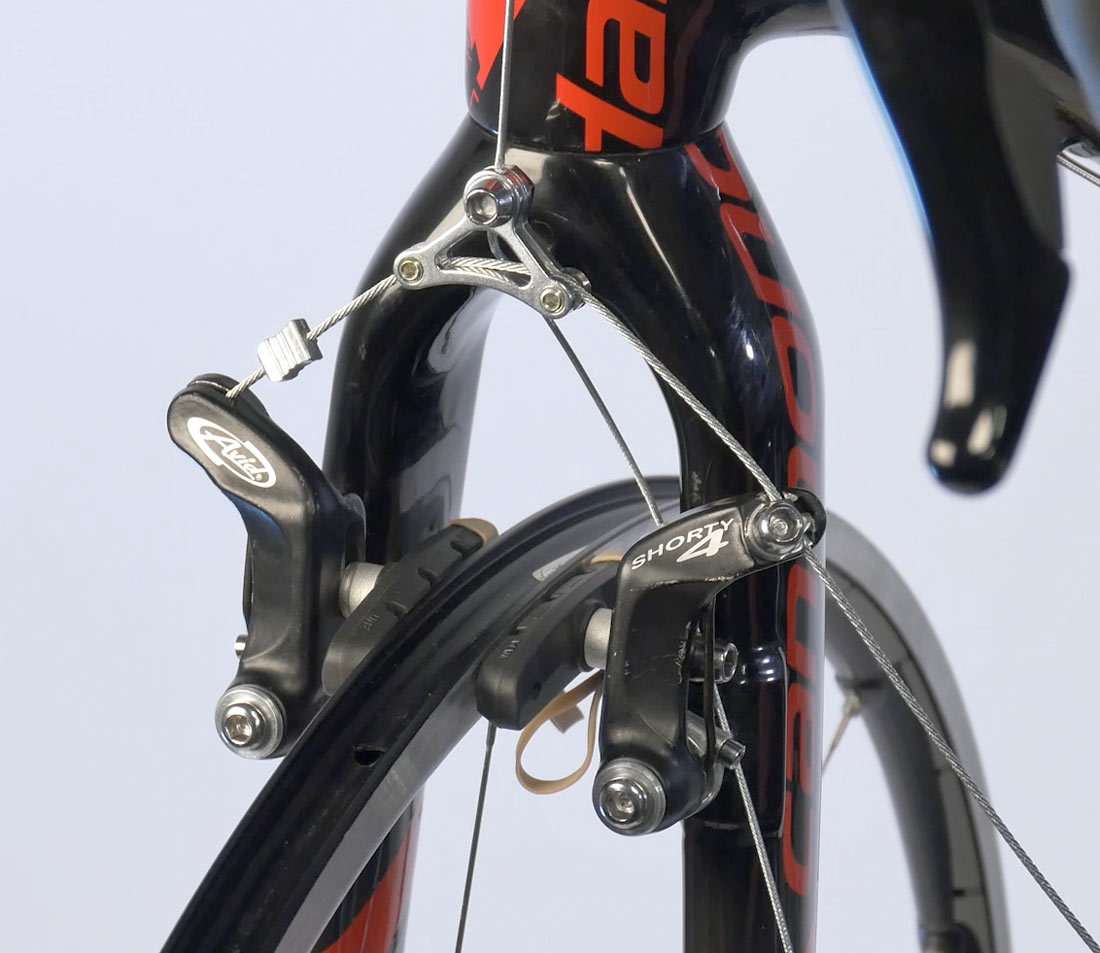 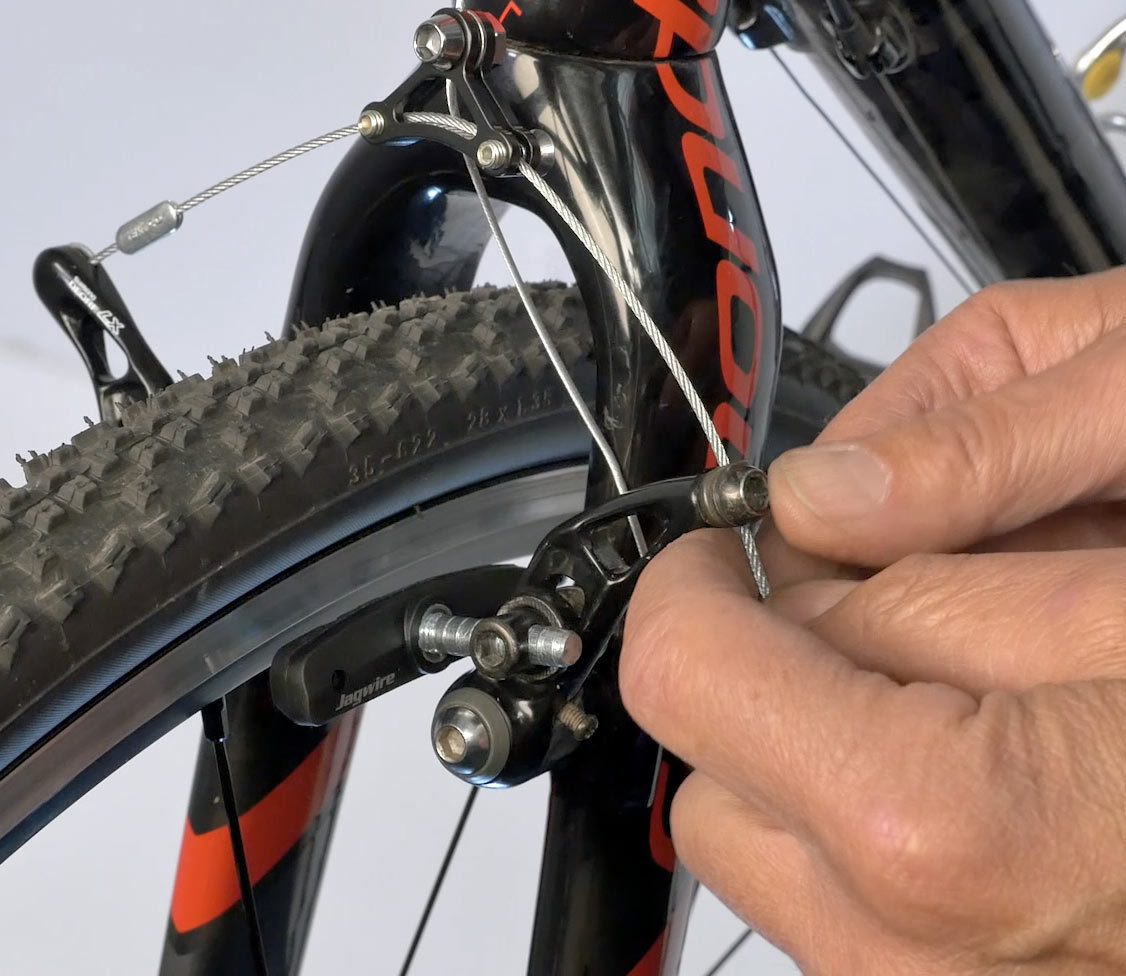 Pull cable through the pinch bolt to adjust the position of the caliper arms. Adjust straddle wire length so the arms are approximately parallel. 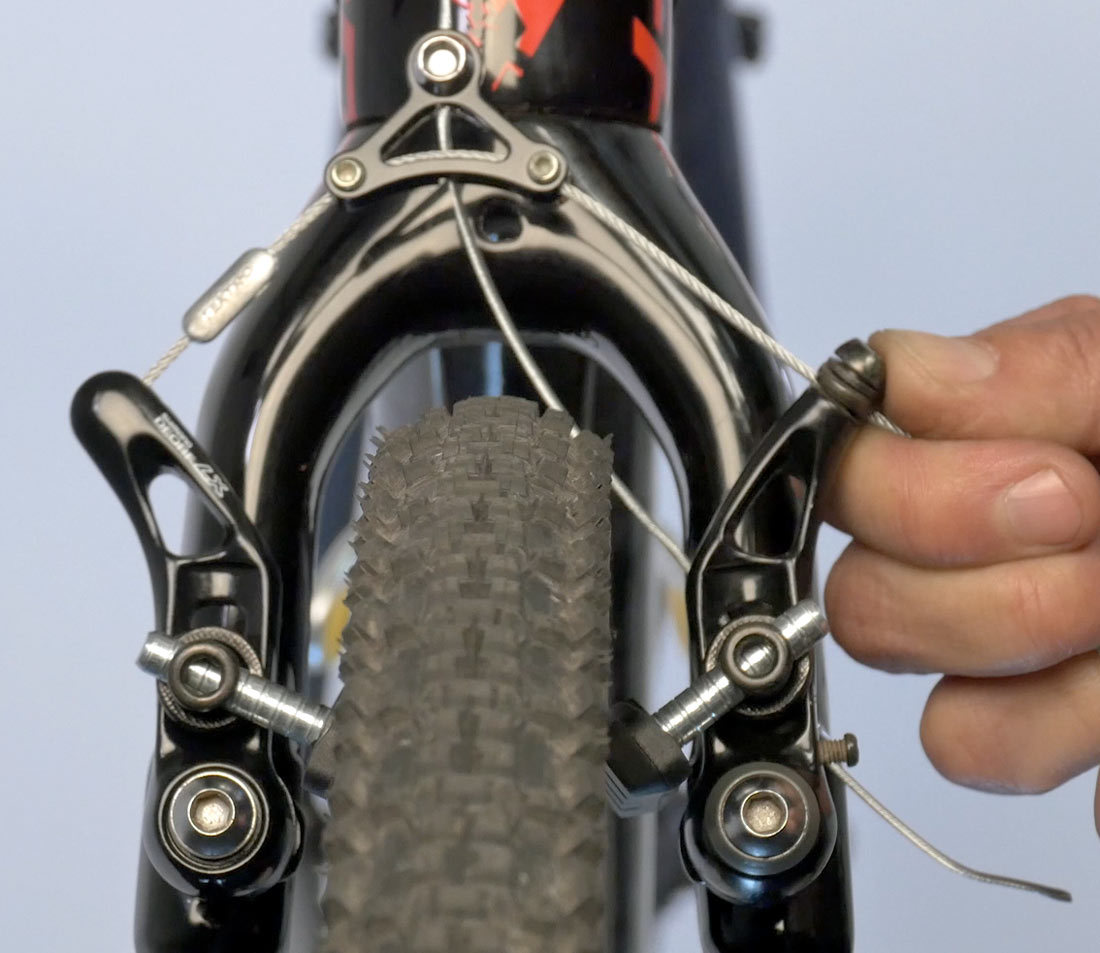 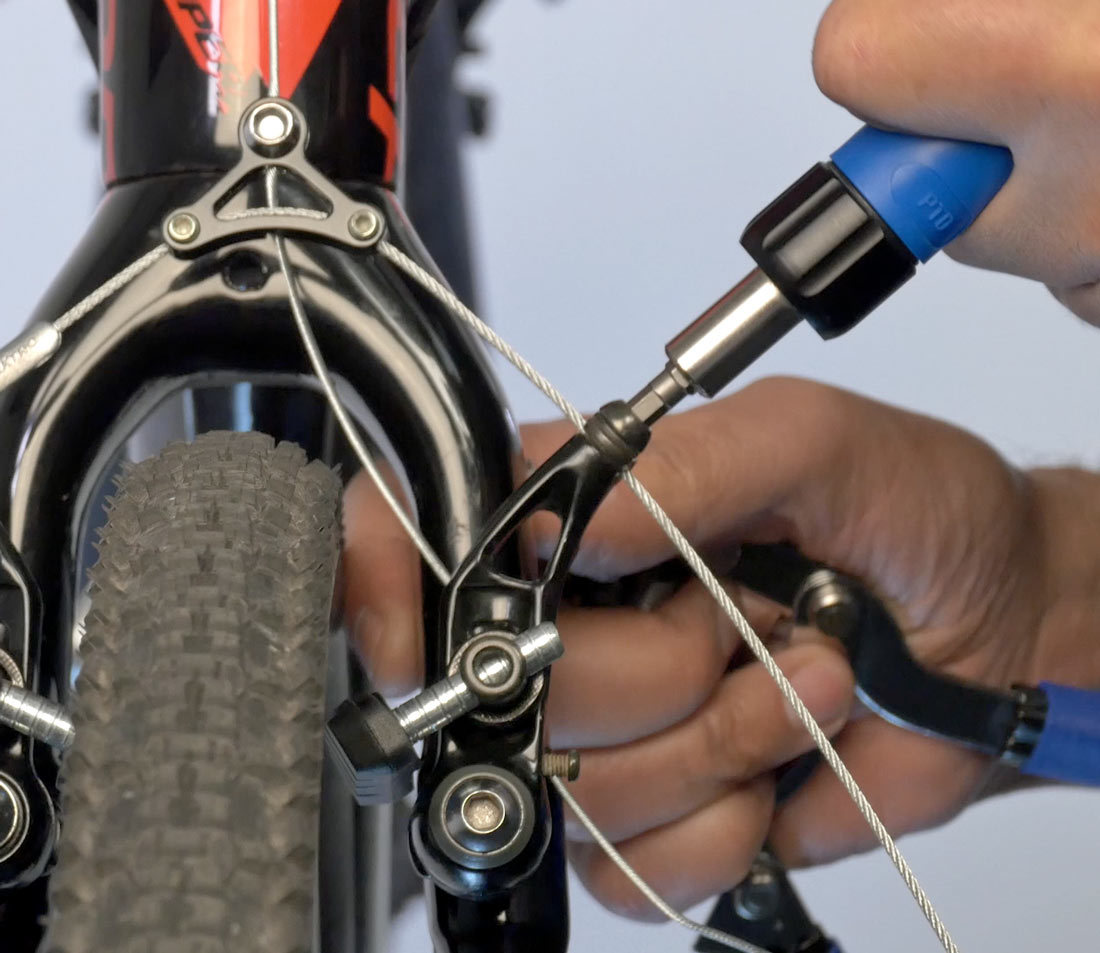 Brake pads are typically adjustable in several directions. The pad should be correctly adjusted for vertical height alignment, tangent alignment, vertical face alignment and pad toe. Not every brand or model of brake caliper has every adjustment, and sometimes you must simply compromise when setting pads. 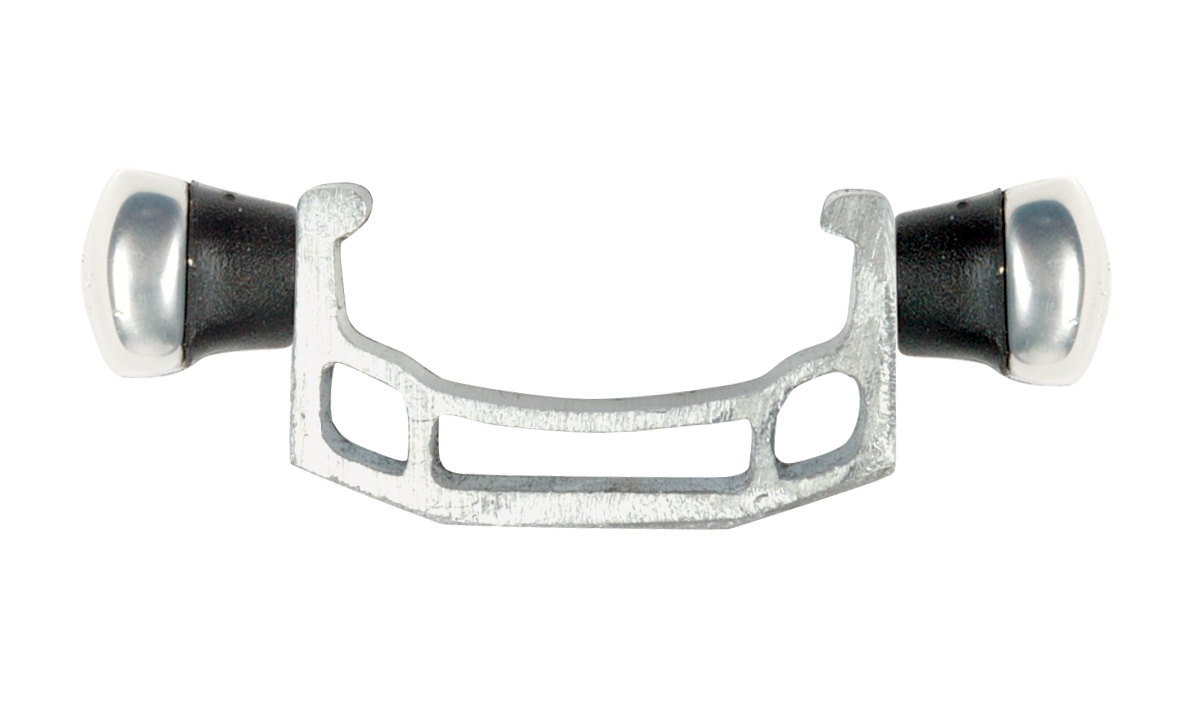 Set height to top of braking surface, but not so high as to interfere with tire

This is the setting of the pad tilt as viewed from the side. The front and back of the pad should be level to the rim. One side should not be higher or lower than the other side. Use care to hold the brake pad to keep it from twisting as the pad is secured.

Pad face and rim surface should be parallel at time of contact.

This is the setting of pad angle as it touches the rim. Toeing refers to setting the pad so the pad’s front edge strikes first, which tends to reduce squeal during braking. Caliper arms tend to have play in the pivots and the arms flex when the brake is applied. This may cause squealing in the brake pads. It is simplest to first ride the bike and see if the brakes squeal. 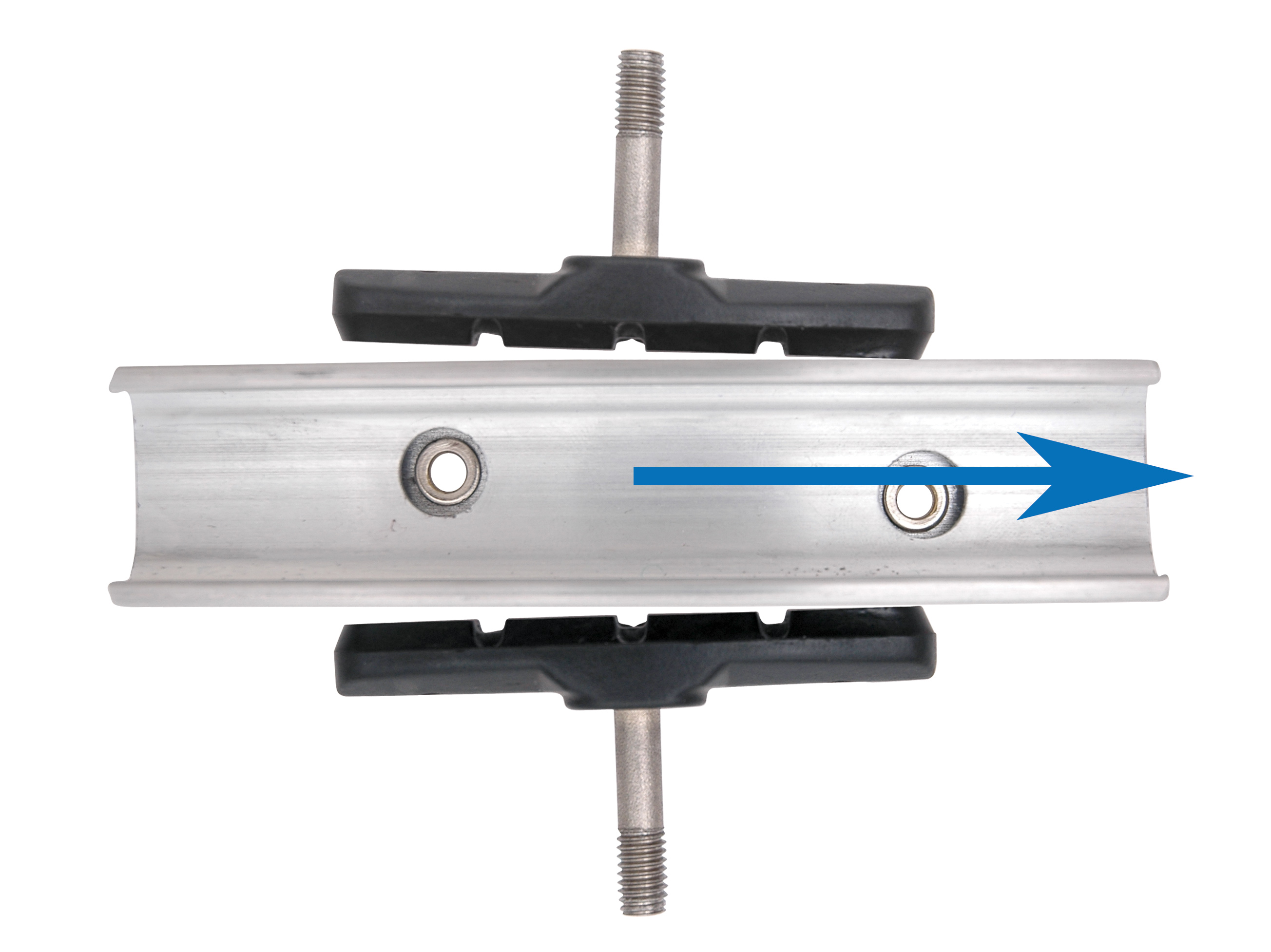 Apply some mild force so the arms are up against the rim using a BT-2, or fourth hand, and draw the pads to the rim or pull hard by hand. Secure the cable pinch bolt. When the pad nut is loosened, the pad can be moved for good height, aligned for tangent, and aligned vertically to the rim. The convex-concave washers tend to align to the position of the pad stud. Secure the pad nut and repeat on the other side. Remove the shims, and there should be a slight gap at the back of each pad which is toe. 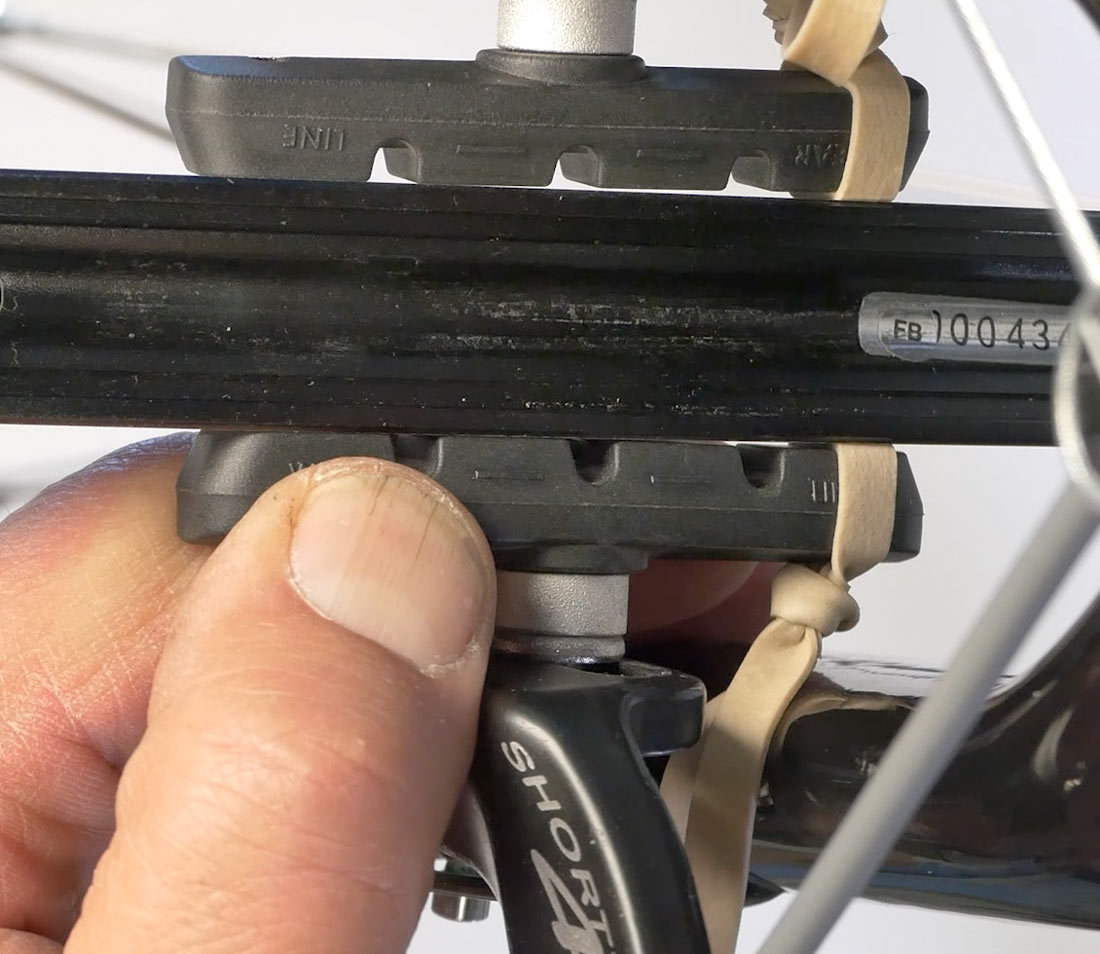 Using shim at back of pad to set brake toe

The next step is to set pad clearance to the rim, as felt through the lever. Setting the pads too close to the lever will result in a brake that is too tight. This makes the straddle wire difficult to remove when getting the wheel out.

If the brake is set too loose, there will be insufficient cable pull to effectively slow the bike. Use either the pinch mechanism or barrel adjuster to fine-tune pad clearance. Normally the setting on the front would then be duplicated for the same feel on the rear.

Fine tuning the pad clearance can be done with the barrel adjuster, located either on the brake lever or above the brake arms. Some bikes lack any barrel adjuster and the adjustment is made by adding or subtracting slack at the cable pinch bolt on the caliper arm. 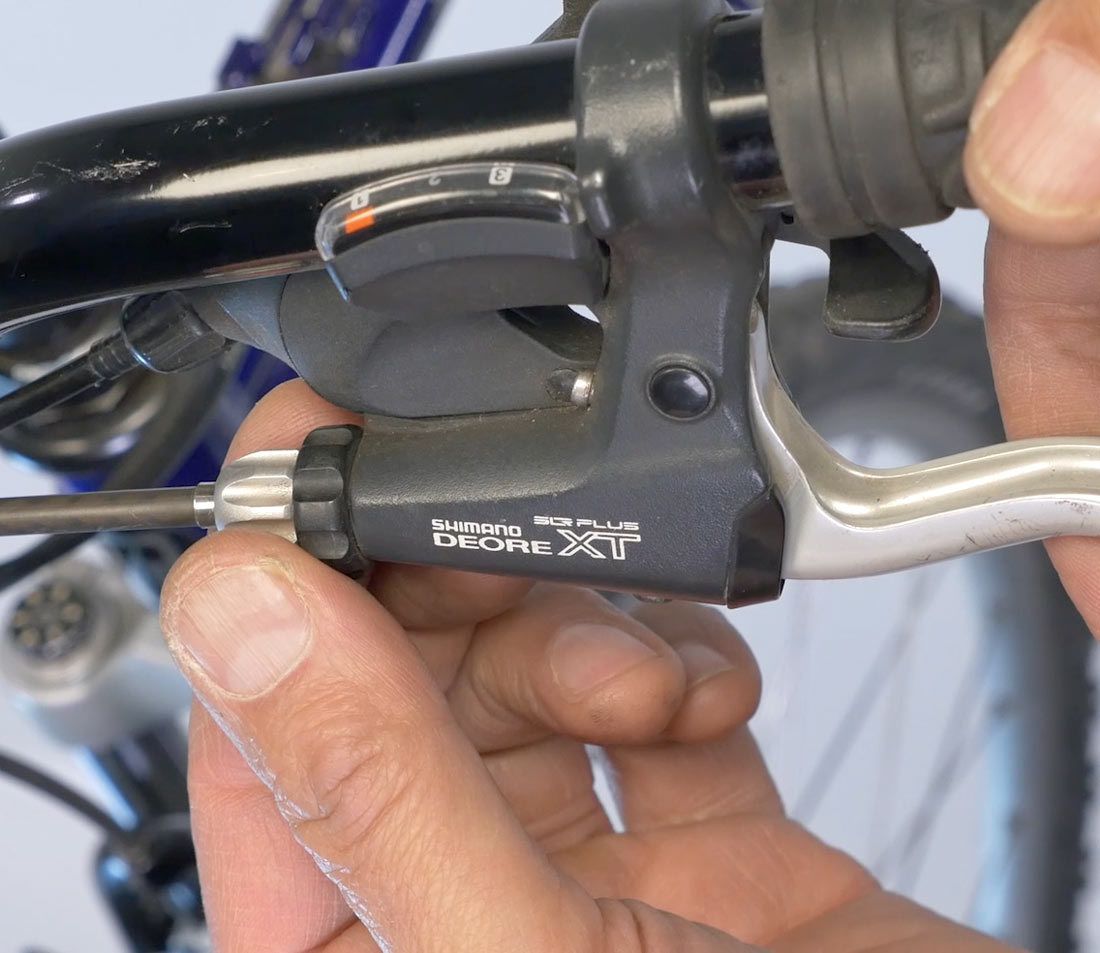 When the caliper arms are open, the pads should appear equally apart from the rim. However, it is not important that the brake pads strike the rim at the same time.

There is often a centering setscrew for moving the arms left or right. The screws increase the outward pull of the spring. If an arm is too close to the rim, tighten that side centering screw to help pull the pad away from the rim.

If only one arm has a centering screw, either tighten or loosen it to move the one arm either away or toward the rim. 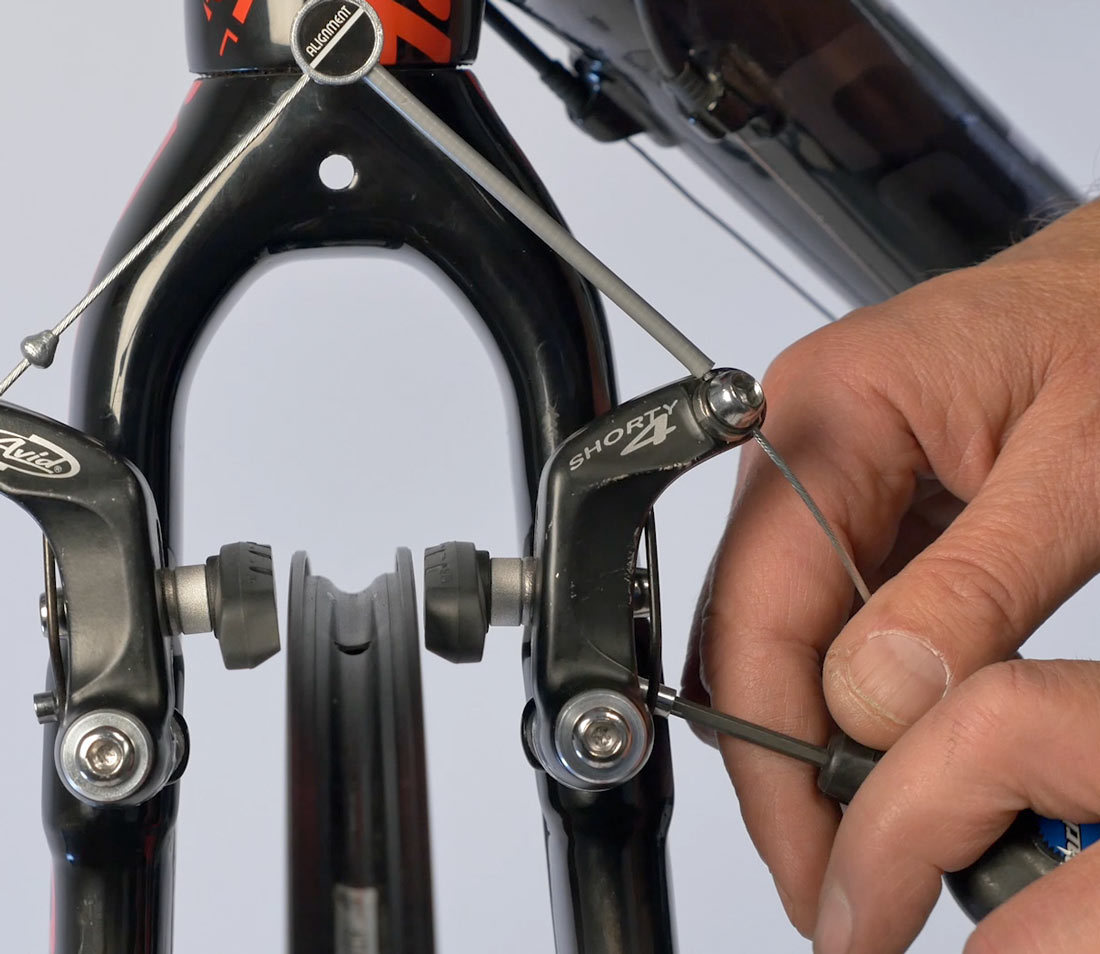 The final step is to trim the primary cable and put an end cap on. It’s important not to cut it too short so that there won’t be enough cable to work with in the future, nor should it be so long that it gets caught in the wheel or brakes. Cut the cable long enough that it can be adjusted in the future. Crimp an end cap onto the cable, tuck it back up into the brake in a tidy fashion, and it’s ready to go. 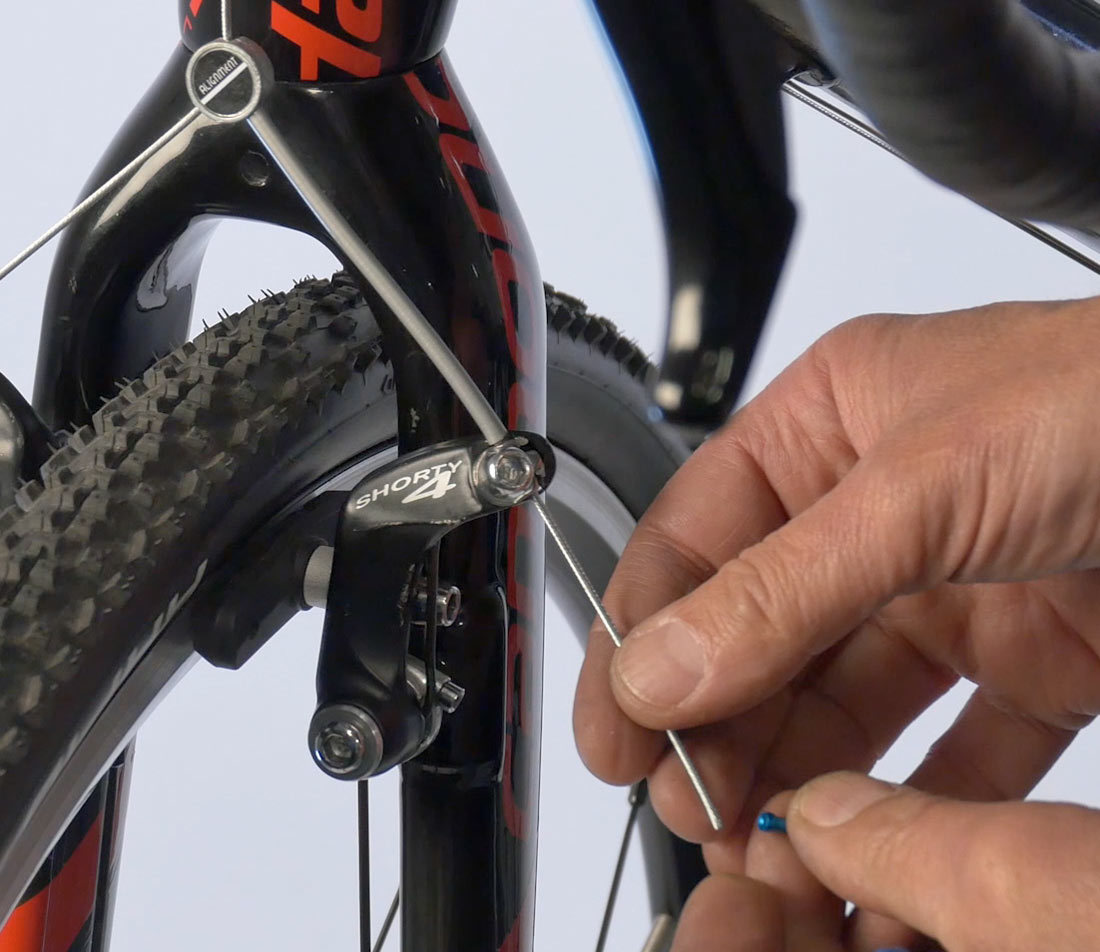 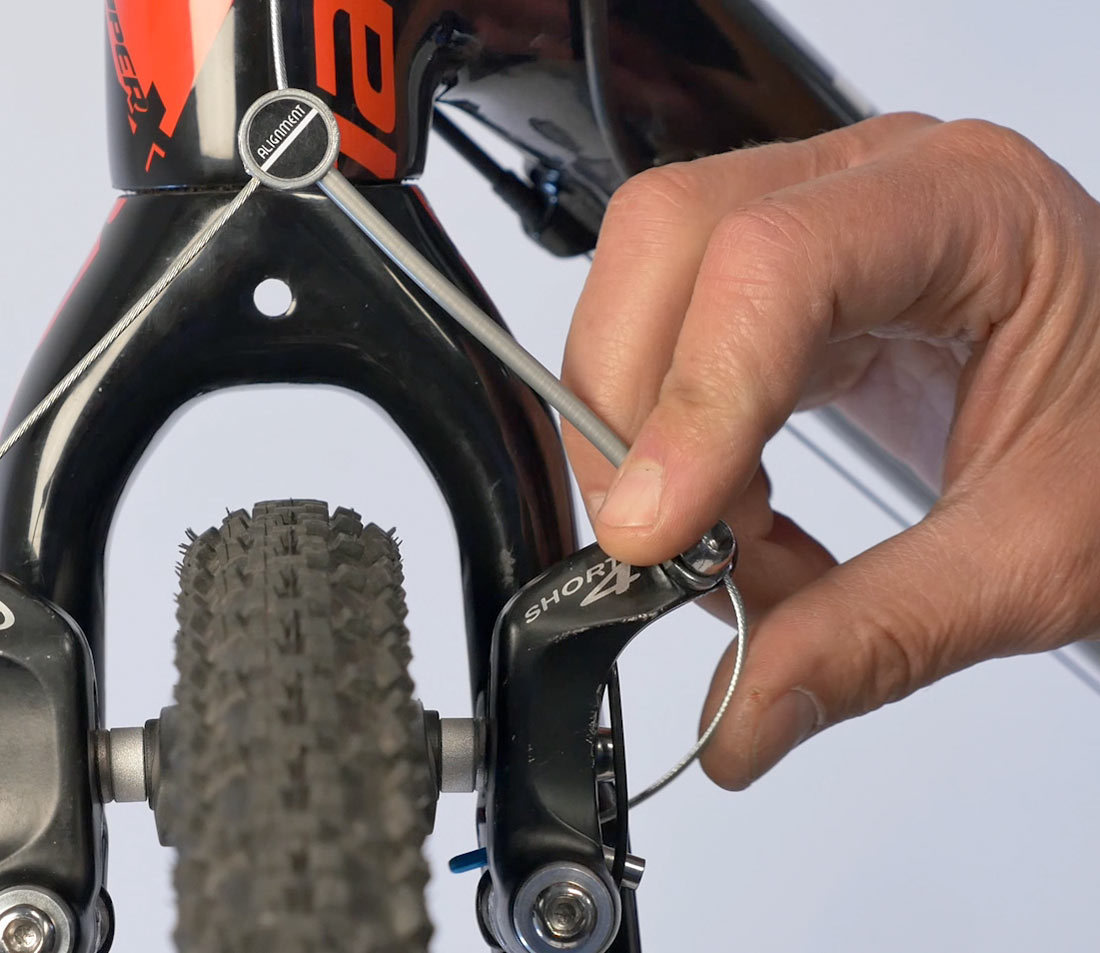