Replacement part compatibility can be a complex issue. When in doubt, check with the bike manufacturer, the component manufacturer, or local bicycle repair professional to obtain the correct parts.

Threaded bottom brackets use a shell with internal threads to hold threaded parts. The frame shell may be threaded directly at the shell, or there may be an insert installed that has internal threads. For a review of tool selection for bottom bracket service, see Bottom Bracket Tool Selection: Threaded and Thread-Thru. 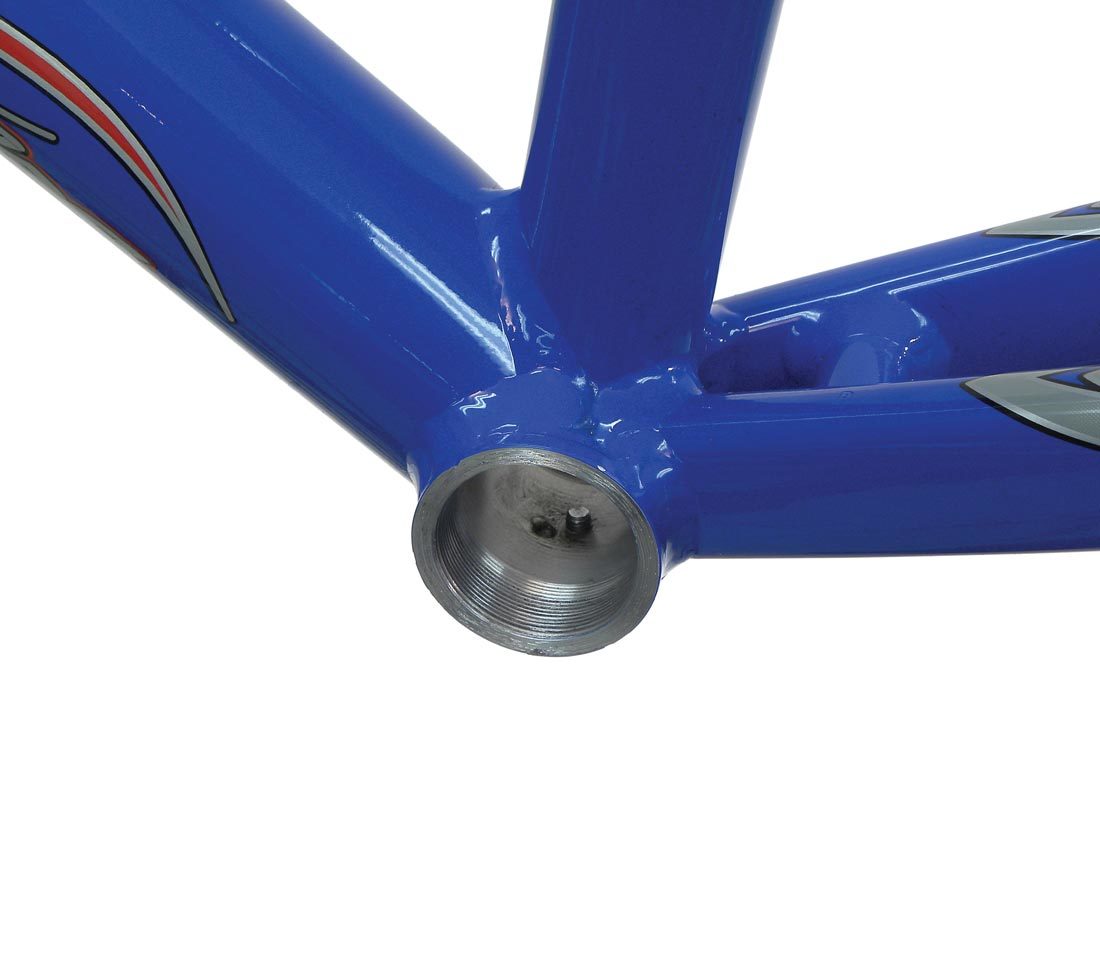 Threaded bottom brackets shells have been made over time in various thread standards that are not interchangeable. The common threaded bottom bracket uses cups or adaptors with the thread specification of 1.37″ x 24 threads per inch (approximately 34.8mm diameter). The most commonly used term for this standard is “English” threading, sometimes abbreviated as ENG. 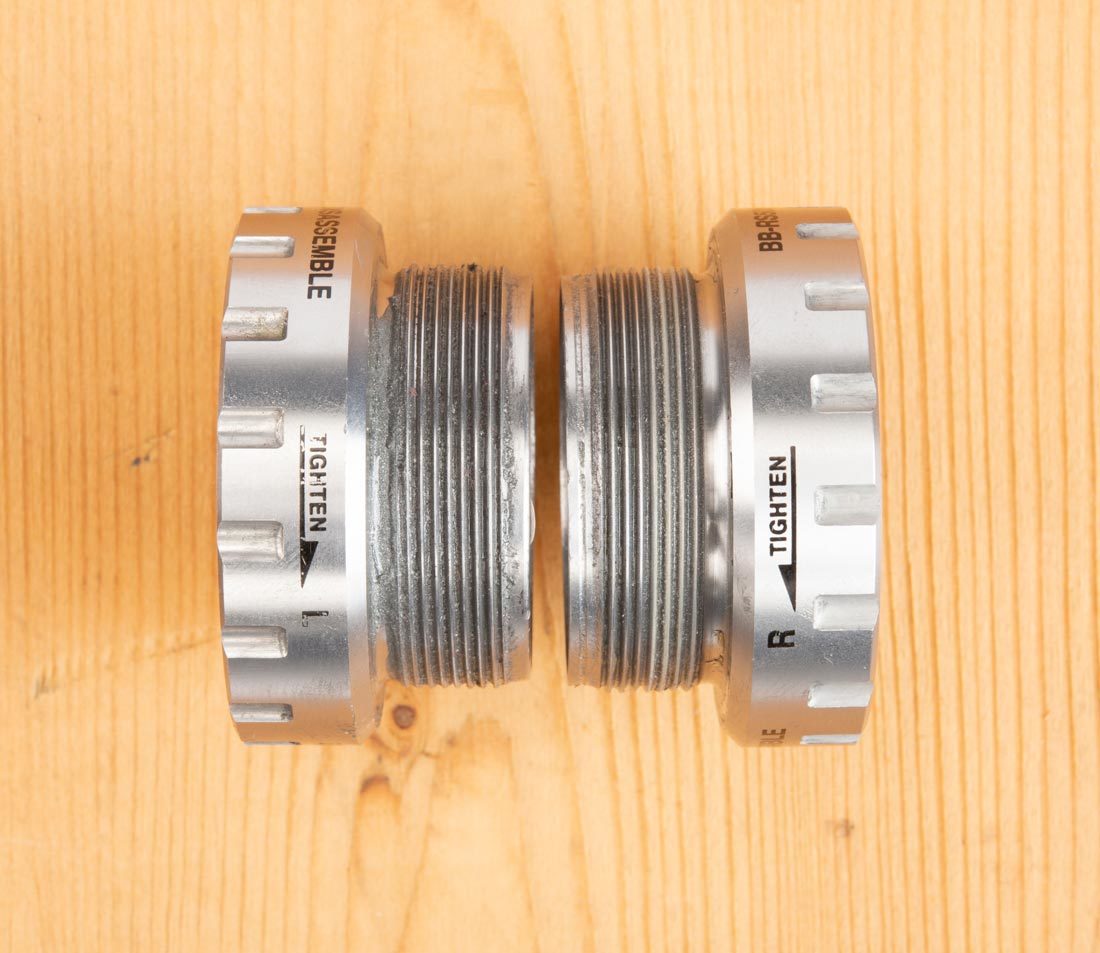 This standard also goes by other names, but they all mean the same thing. These are: BSA, BSC, BC, ISO, British, and Euro, the name used in BMX bike circles. The term BSA stands for Birmingham Small Arms, a British company that produced bicycles, cars and other durable goods. The term BSC stands for British Standard Cycle, which adopted the same standard. BSC is sometimes shortened to BC. The term ISO is refers to the International Standard Organization, an international standards organization, which also adopted this same standard to be the ISO standard.

Other less common threading standards such as ISIS Overdrive, Italian, French, Swiss and others are discussed later in this article. 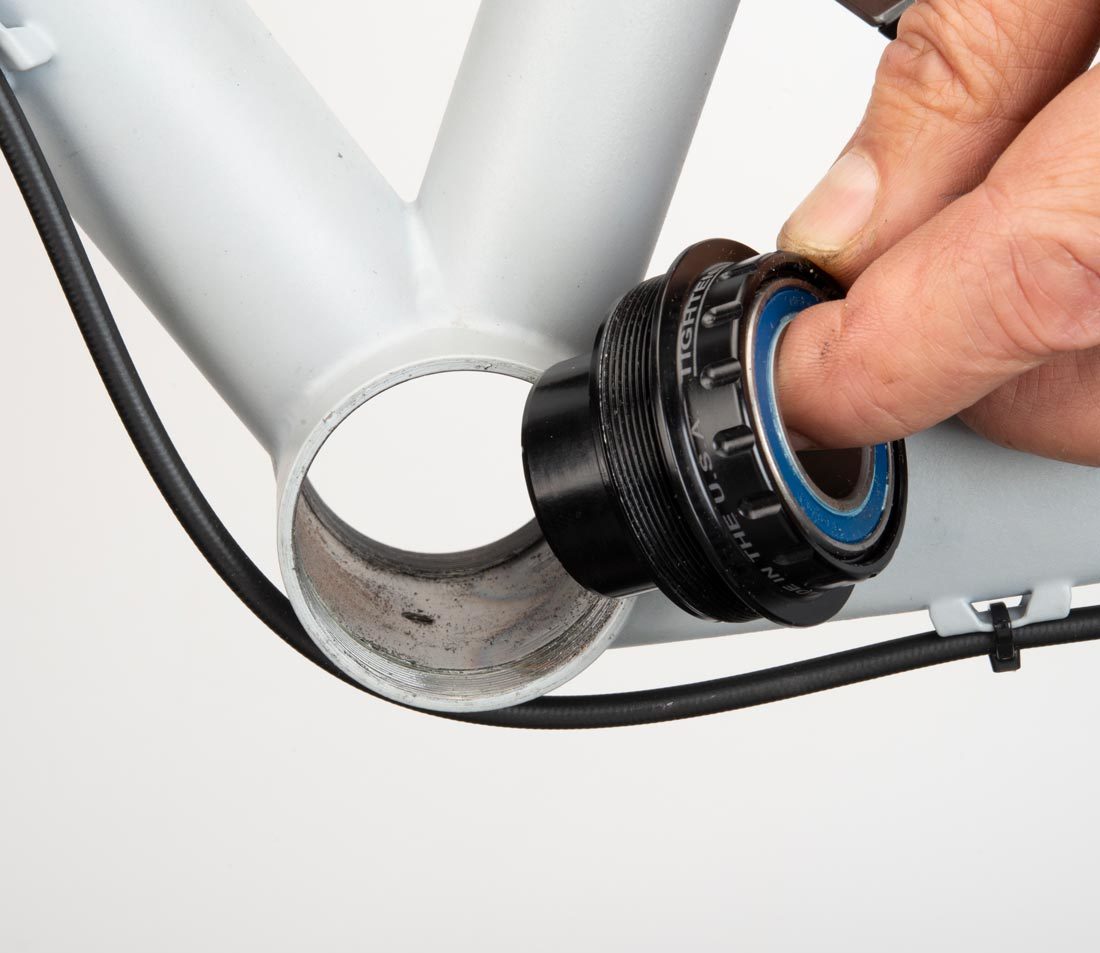 The T47 frame shell will have approximately a 46mm inside diameter.

Press fit bottom bracket frame shells use a simple bore with no internal threading. The bearing or bearing cup will be slightly larger than the bore of the frame and is pressed inside the shell. This creates an interference fit, also known as a press fit. The bottom bracket is held in by the pressure created by the interference.

The terminology of press fit bottom brackets has become especially confusing. Some standards were named for the spindle diameter, others were named for the shell width, and still other terms came from the size of the bore where the press fit occurs. Because the frame shell bore diameter is the only consistent and most important part of the press fit system, the bore size is the preferred system and will be used here.

Shells of the PF41 standard have a smooth bore with a nominal 41mm inside diameter. Other terms for this press fit standard include BB86, BB89.5, BB92, BB107, BB121, BB132, PF24 and Shimano® Press-Fit. The numbers numbers ranging from 86 to 132 refer to the nominal width of the shell in millimeters, which is not related to the press fit of the bearings. These bottom brackets will vary in the width of the dust sleeve used for that different widths.

The term “Shimano® Press-Fit” refers to the company that developed bottom bracket components in this standard. The BB392 EVO is a shell with for use with compatible BB392 EVO cranksets but uses the same 41mm bore. The term PF24 is for bearing adaptors fitting a 24mm spindle in a 41mm bore frame. 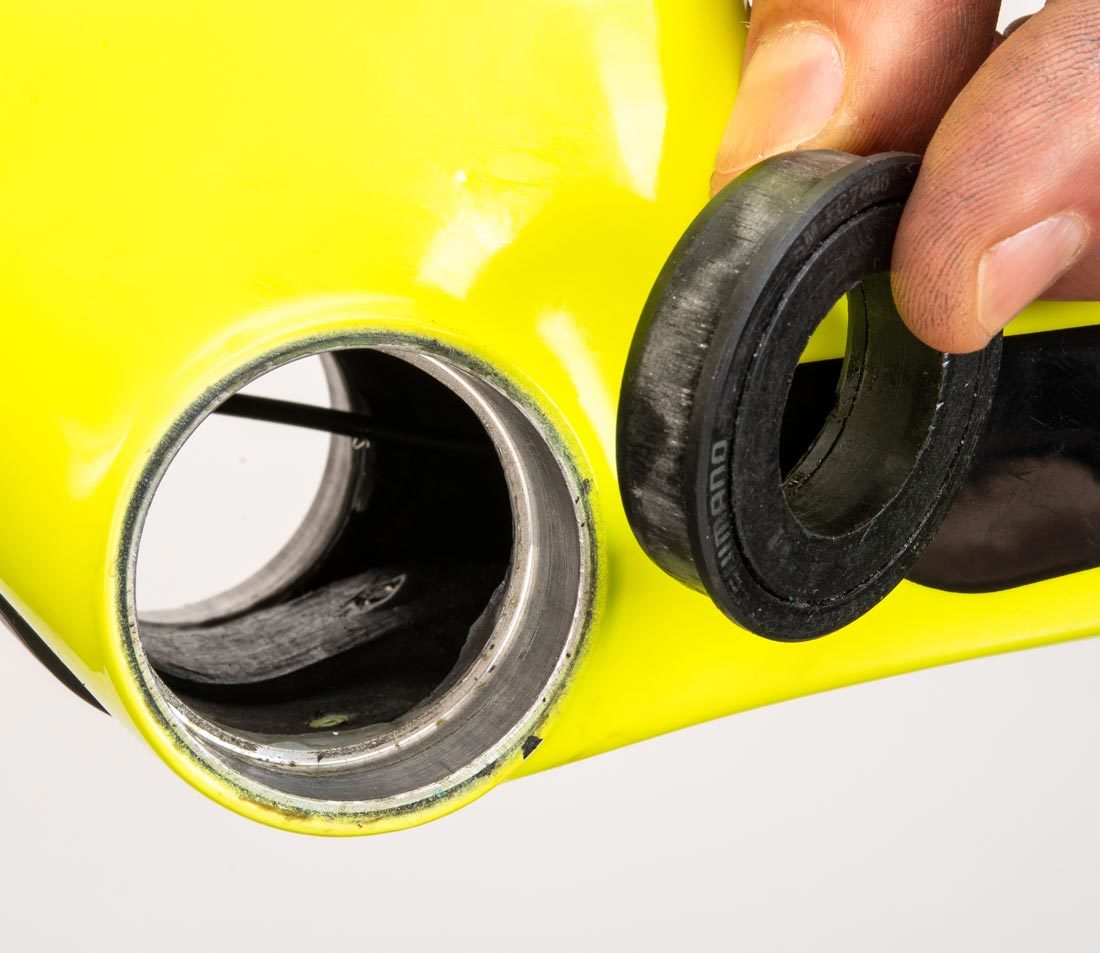 The PF41 press fit standard is available with several bearing inside diameters for various crank spindle systems, such as 24mm, 28.99mm, 30mm, and the stepped 22/24mm.

The term PF42 refers to the inside diameter of the shell. The term BB30 was an early term in the history of this standard and refers to the 30mm diameter of the spindle used at that time. However, bottom bracket bearings are available in this standard for 28.99mm, 24mm and 22/24mm spindle systems. The only commonality amongst these different terms is the 42mm nominal press fit dimension. 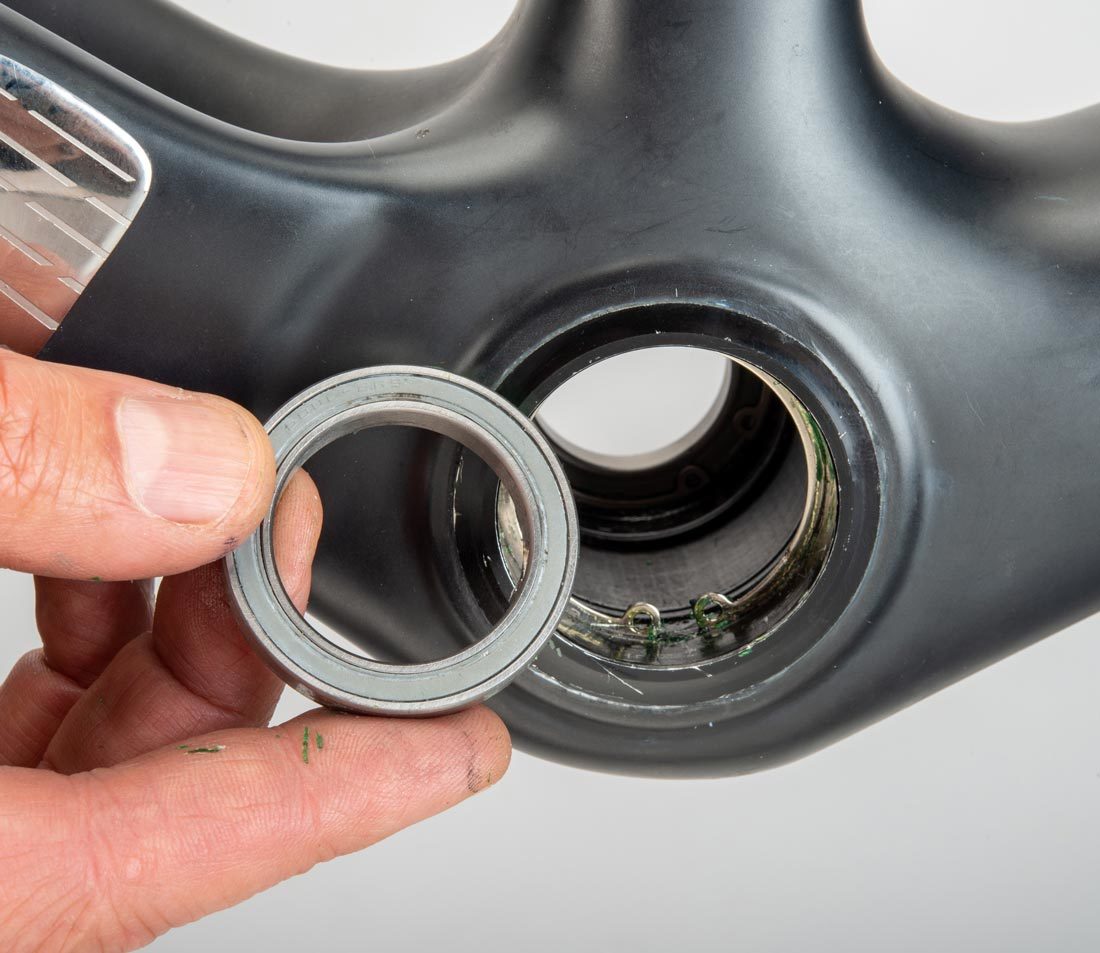 The terms BB30a, BB30ai, and BBright™ Direct Fit refer to asymmetrical shell width designs, which does not effect the press fit of the adaptors to the bike.

The term PF46 refers to a frame shell bore of 46mm. The term PF30 is an early industry name used to distinguish this standard from the previous BB30 (PF42) standard. The frame shell has a smooth bore with an approximately 46mm inside diameter. The shell widths are 68mm for road bikes and 73mm for mountain bikes. The cartridge bearings of the PF46 system use an adaptor of plastic or aluminum and are pressed into the bottom bracket shell. Bearing adaptors are made to fit different crank spindle diameters, such as 22/24mm, 24mm, 28.99mm, and 30mm. 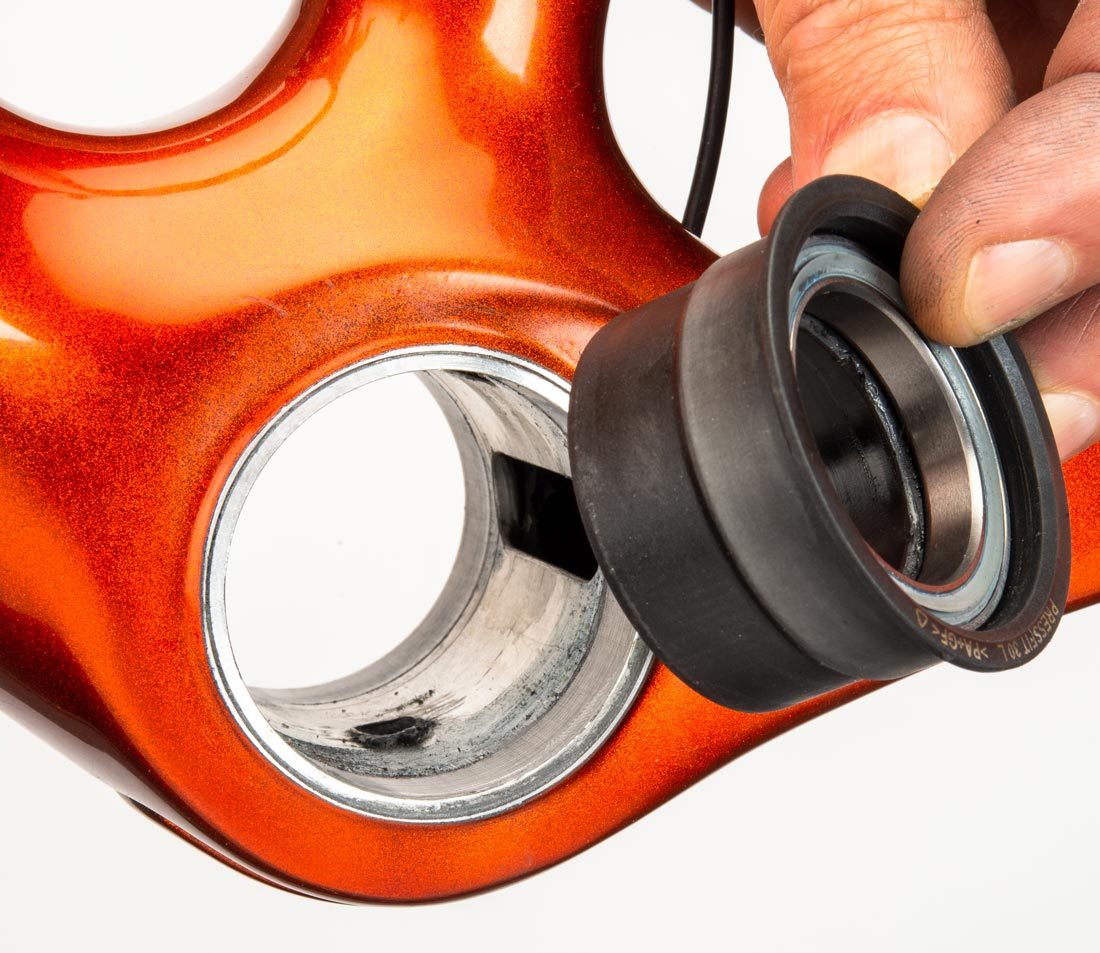 The terms PF30a, PF30ai, and BBright™ Press Fit refer to asymmetrical shell width designs and do not change the press fit of the adaptors to the bike.

BB90 and BB95 are proprietary standards used by the Trek® Bicycle Company. The numbers 90 and 95 refer to nominal shell width. This unique bottom bracket shell is not a straight bore but has an internal bearing retainer built into the shell, similar to an integrated headset. Bearing outside diameters are 37mm. 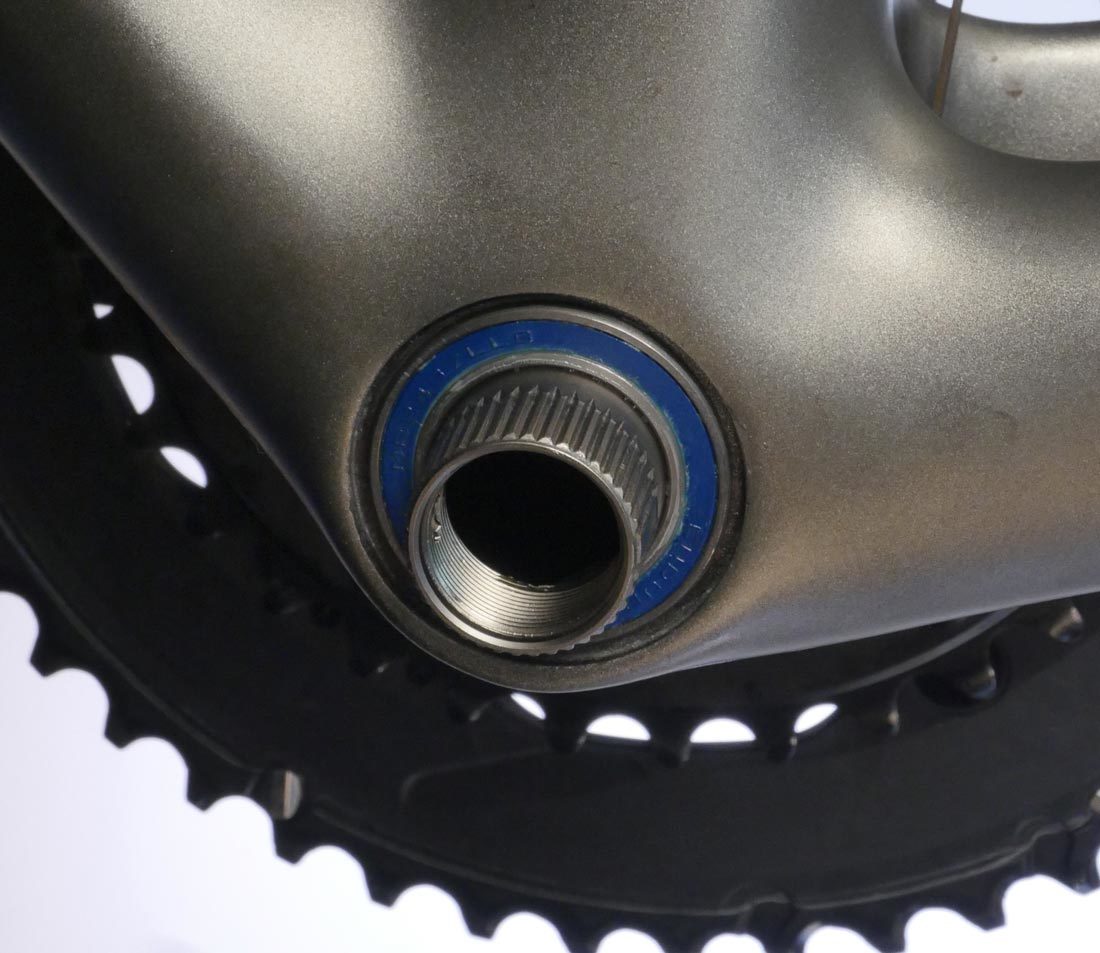 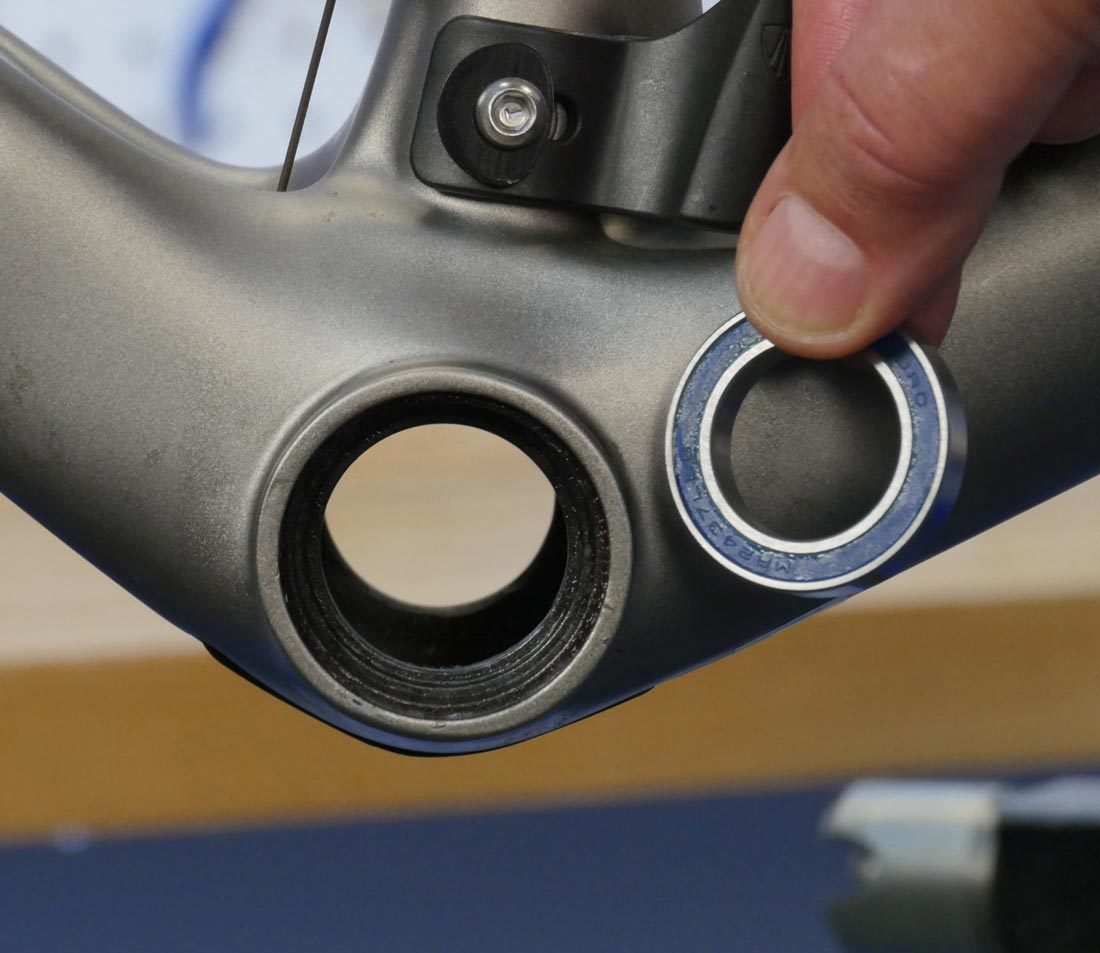 Spanish Press Fit is a BMX standard. The frame bore is nominally 37mm.

Spindle ODs may be either 19mm or 22mm. There is no adaptor or cup and the bearing is pressed directly into the frame. 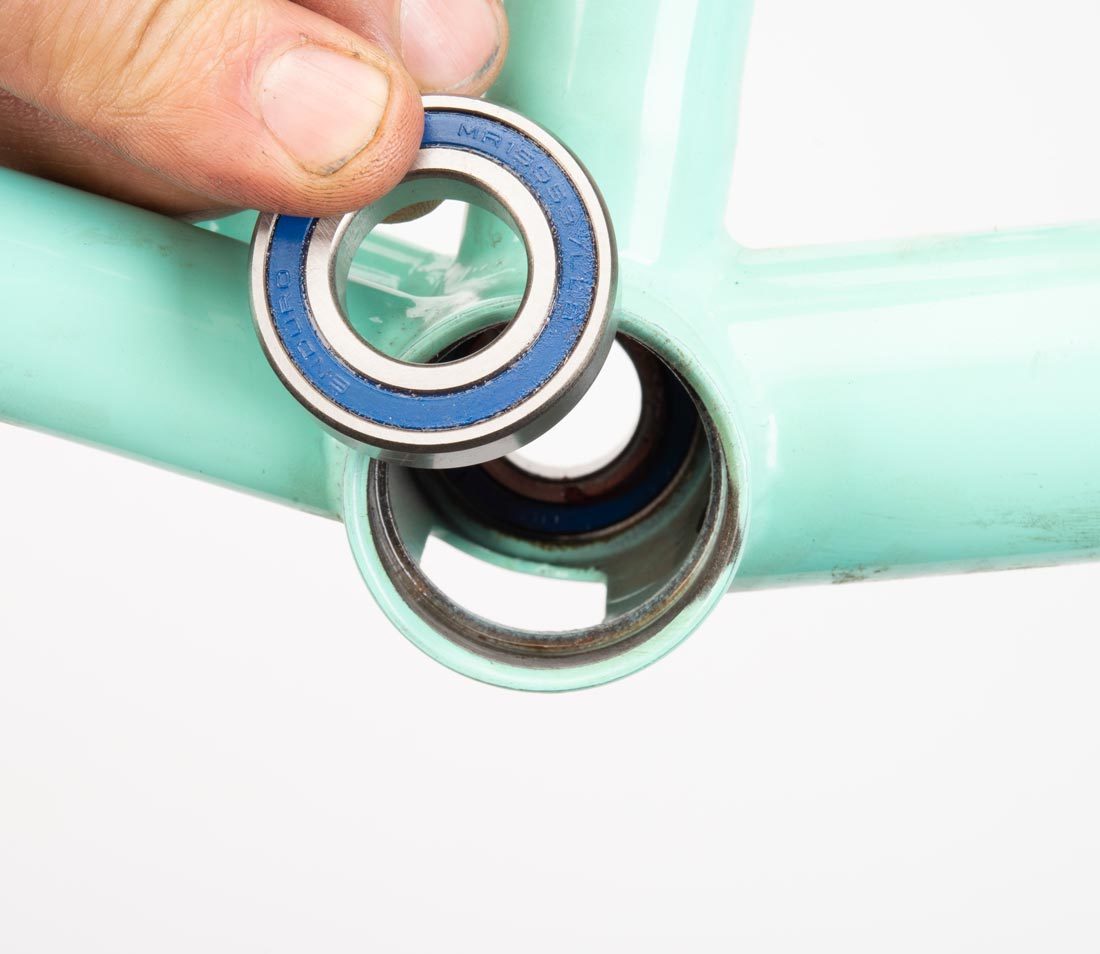 Mid Press Fit is another BMX standard. It uses a 41.2mm (1-5/8″) diameter cartridge bearing. Like the Spanish standard, the bearing is pressed directly into the frame.

The American, or Ashtabula, standard uses a 51.5mm cup pressed into the frame. It is seen on older Schwinn® bicycles, some BMX bicycles, and various bikes at a lower price point. Another term for this system is the “one-piece crankset.” 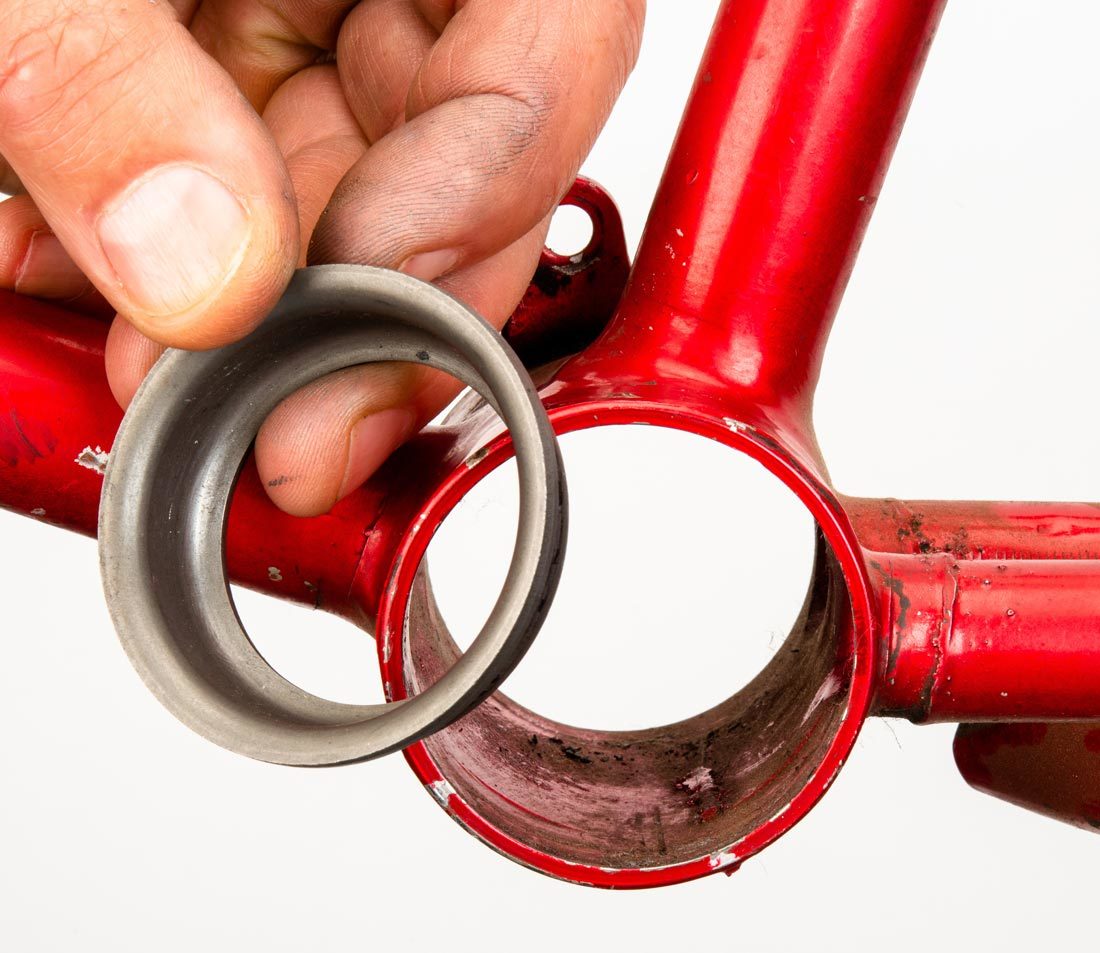 There are adaptors that can be used to downsize the large bore of the shell to use threaded English bottom brackets, as well as the BMX Mid and Spanish standards. 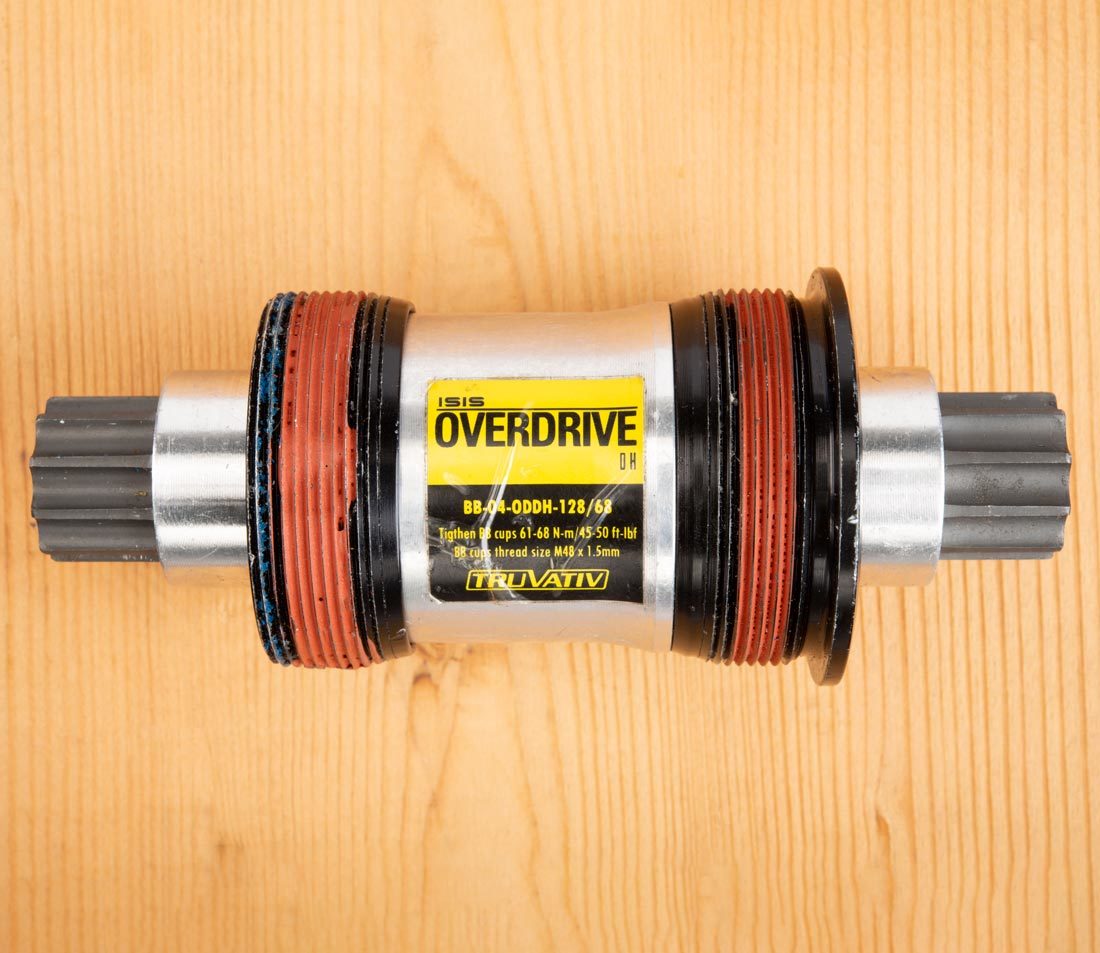 The inside diameter of the shell is approximately 46.5mm. The crank-to-spindle interface will be the ISIS spline interface. 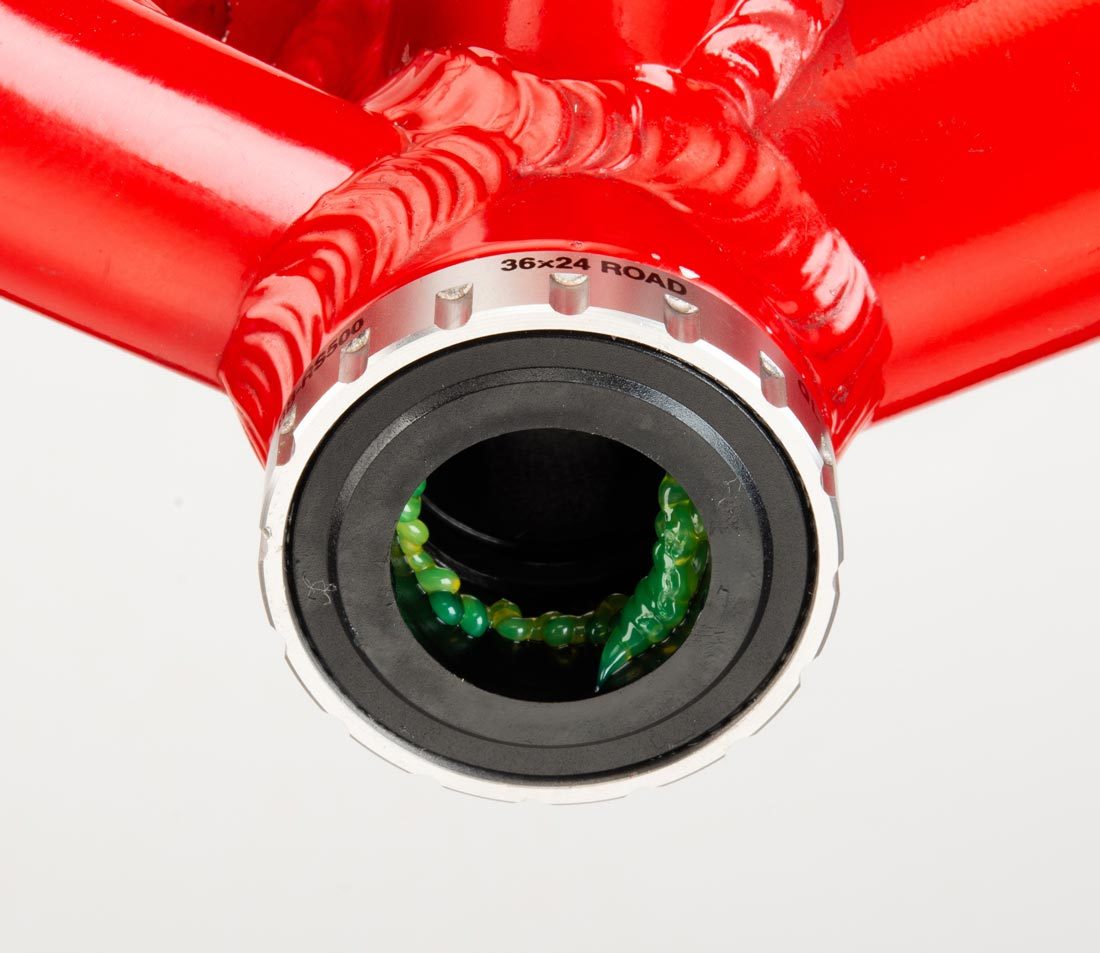 Frames in this standard can be distinguished by a 35mm inside diameter.

The French threading standard is now considered obsolete. It uses a 35mm x 1mm pitch. Both non-drive and drive side cups use a right hand threading. The shell inside diameter is approximately 34mm. Not all French-made bikes use French Threading.

This is an older and obsolete threading standard seen primarily on 20th century English 3-speed bikes. Threading size is 1.37″ x 26 tpi. The drive side uses left hand threading. Do not confuse this with the common English threading, which uses a 24 tpi threading. The two systems are not interchangeable.